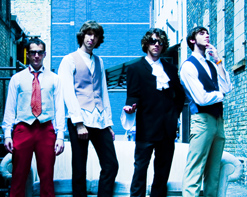 Spring salutations to all! It’s Andy Gesner and the staff from HIP Video Promo bringing you what could be the best pop-rock video of the year. Many bands – even great bands – struggle to fit their visions into the music video format. That’s not the case with Love in October. The members of this Minneapolis power-pop four-piece were born to make music videos. Their debut EP might have been produced by legendary Midwestern producer Ed Rose (The Get Up Kids, Motion City Soundtrack), but their hearts belong to Broadway and the Hollywood Hills. “A Day in the Life Of” is their first clip, but they’ve already got the basics down: they know when to be flamboyant, when to sing, when to dance, what costumes to wear, and when to go straight over the top. We’re comfortable saying that if more bands were like Love in October, the ratings for music video channels would double overnight..

Of course, modern groups have advantages that older bands did not – for one thing, they can try out their ideas on MySpace and YouTube. Love in October haven’t been shy about exploiting the new media – viral videos of the quartet in performance have been circulating all over the Internet for months. They’ve done parodies of the Dating Game, wild choreography, filmed documents of their day-to-day lives, and they’ve posted strange, unclassifiable clips for which our descriptions can’t possibly do justice. They’re all available on the Love in October site and elsewhere. It was inevitable that when they turned their attention to making a pro-quality music video, they’d be comfortable in front of the camera, and they’d never be short on ideas.

Even the band’s live performances are visually sophisticated. They’ve got strobelights, gels, wild dance routines, matching outfits and crazy backdrops, and they’re not afraid to show all of them off. Unabashed theatre kids, Love in October have recently integrated two-minute “speed musical” segments into their show intermissions. “We’ve done Cats, The Lion King, Titanic, The Sound of Music, ” boasted singer Erik Widman in a Minneapolis City Pages interview. “We’ve tried choreographing some of it, but it’s better if it’s improvised, you can play off the crowd and get them involved.” Coupled with the band’s heady fusion of rough-and-tumble Midwestern guitar rock and super-melodic Swedish pop, it’s been enough to send local audiences into fits of delirium.

The four members of Love in October assume – and fully inhabit – characters for the “A Day in the Life” clip: a dashing hero, a swordsman, and a stereotypical nerd. They shot scenes is a genuine turn-of-the-century chateauesque mansion and found the period costumes to match the theme. The whole thing is a high-spirited hoot, and there are intentional anachronistic breaks with continuity – some of the belles at the ball are wearing sneakers, one guy is breaking, etcetera. There’s a fencing duel on the staircase, some truly elegant ballroom dancing, a performance in costume by the rock band, aerial Busby-Berkeley shots, and a dramatic black and white fight scene that flashes back into color at its climax.

What’s so remarkable about the “A Day in the Life” video is that Love in October is a true independent band. No studio bankrolled this project. They made this elaborate (and accomplished) video on their own budget, and with their own inspiration, and with their own friends as collaborators and extras. Director Justin Staggs is a long-time favorite of HIP, and we are psyched to have the opportunity to promote another one of his videos! A band that makes music as catchy and energetic as Love in October will inevitably get that record deal, and when they do, there’ll be no limits to what they can accomplish. For everybody who loves the music video form, here’s a young band to watch.

We’d like to thank Carianne Johnson and the entire Love in October camp for hooking us up with some copies of their new EP, Words of Sound for your on-air giveaway needs. If you’d like a copy, drop us a line and we’ll hook you right up! We can also hook you up with the chance to do a video interview with the band when they come to your market. If you need more info call Andy Gesner at 732-613-1779, or email info@HIPVideoPromo.com. You can also visit www.LoveinOctober.com to find out more about Love in October.