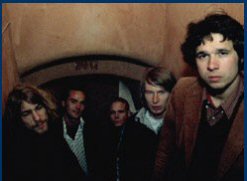 Hi, it’s Andy Gesner and the staff at HIP Video HQ here in New Jersey with the second of our two shot of Norwegian psychedelic video love. One of the best parts of this job is getting to speak with and learn from the dozens of records labels we are so fortunate to work with. Large props to Rainbow Quartz Records for staying true to the DIY aesthetic and having the balls to transverse the world to find only perfect guitar pop. As a relatively new label on the scene, two dozen up and coming bands from all over the world have made Rainbow Quartz their label home, including Myracle Brah (Big Star meets The Raspberries) and Detroit’s much heralded Outrageous Cherry and The Singles.

Hailing from Oslo, where they are well-established, The Lovethugs’ first American release is the full length CD Playground Instructors , out now on the aforementioned Rainbow Quartz label. You have to love any band that fuses hopeless romantics with former under-age criminals. The new video for The Lovethugs is for the opening track, “A Little Bit of Something”, a joyous romp of jangly telecasters and heavy coat wearing exuberance! Right from the opening bars, guitarist/vocalist Jim Faulty and keyboardist Pablo Breaks establish an interplay that is reminiscent of Robbie Krieger and Ray Manzarek at their ethereal and melodic best. Faulty’s brisk and confident vocal has a sort of Edwin Collins meets Graham Nash timbre and fits smoothly into the song’s midtempo groove. Producer Knut Schretner leaves plenty of breathing space in the mix, giving the music room to soar.

That’s in contrast to the video, where we see the band set up, perform, and break down in the claustrophobic confines of a narrow corridor. The Lovethugs groove along, unperturbed by the comings and goings and jostling of a small horde of crew members, associates, excitable and ultra cute Norwegian hotties and other assorted extras. Director Tor Egil Schelde also adds some performance footage from a club date, but the main focus here is on the colorfully skewed guitar backdrops and tambourine smacking, foot tapping music.

To create excitement about this promotion, HIP Video and Rainbow Quartz present the “Norway Invasion” contest. Any programmers that adds The Lovethugs “A Little Bit of Something” video enters a drawing to win the complete Rainbow Quartz catalogue (over 30 Cds)! For more info call Andy Gesner at 732-613-1779, e-mail info@HIPVideoPromo.com or visit our website, www.HIPVideoPromo.com. The drawing will take place December 27th.