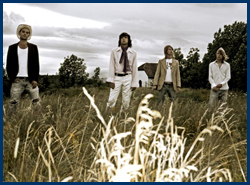 Summer is here! It’s Andy Gesner and the staff from HIP Video Promo with another clip that is sure to please your viewers. It’s probably come to your attention that Scandinavian groups know a thing or two about psychedelic rock. In the Nineties, when everybody in America seemed to be dialing up their amps to eleven and roaring out their alt-rock anthems, bands in the Nordic countries were keeping the flame of Beatlesque songcraft burning. Now that there’s been resurgent hipster interest in Sixties guitar pop, the Norwegians and Swedes are once again leading the pack. The Lovethugs, Oslo’s favorite sons, have now recorded two albums of majestic neo-psychedelia – and it’s been our pleasure to work with this outstanding band to bring their music to the attention of an American audience primed for their interpretation of classic-era head music.

They’re already stars in Norway – a competitive rock and roll market for sure, and one that’s lately been producing artists whose music travels the Atlantic without friction. The Lovethugs have already won the hearts of their countrymen, and they’re regulars at Oslo’s biggest clubs. Singer and principal songwriter Jim Faulty has that rare and vital talent among revivalists: he can make psychedelia sound current. He does so by drawing from the second wave of trippy-rock to penetrate the pop charts; bands like Echo & The Bunnymen and The Teardrop Explodes. Faulty understand the link between Jim Morrison and Ian MacCulloch, and, cannily, he knows that the kids currently kneeling at the shrine of Factory Records might, with a little persuasion and some strong writing, be persuaded to understand the greatness of the original Sixties source material. The Lovethugs singer doesn’t exactly sound like Morrison or MacCulloch, but he’s got enough of that growl in his voice to conjure memories of both of those greats.

“Close Beside Her” is an excellent example of this Sixties-Eighties hybrid. The faux-sitar and swirling guitar riffs are pureMagical Mystery Tour, but once Faulty starts singing, it’s more like Kilimanjaro. As always, the performance committed to tape by the Lovethugs ridiculously-tight rhythm section is sensitive and responsive – and once they reach the call-and-response chorus, the song positively levitates. Psych-rock is often confrontational, trippy, and disorienting; not many songs of this sort truly deserve to be called gorgeous. This is one of them.

Video director Karl Kristian Meidell is also an Oslo-underground loyalist: his indie short films have won him hometown acclaim and recognition abroad. He’s also a veteran Lovethugs collaborator. His clip for the title track from Babylon Fadingpresented the Norwegian combo as surprisingly dangerous; sexually provocative, slightly destabilized, attracted to the deadly allure of glamour. “Close Beside Her” calls for a simpler treatment. But although Meidell presents the band in an idyllic setting, temptation is never far from his lens. The band is shot relaxing on a yacht; they swing in hammocks, play music, and jump blithely into the ocean. They’re followed by several attractive women, all of whom wear the blissed-out expression of midsummer lust. Meidell shows skin: both that of his models, and of the bandmembers themselves. This pleasure boat is a sexually-charged arena, and one that feels pregnant with possibilities. To further that sense of sun-zonked languor, the director fuzzes the footage slightly. It all looks overexposed and baked by solar rays – a document of a high-sky day lost in psychedelic reverie.

We are so happy to be working with Jim McGarry, Tracey Maloney, and all of the terrific folks at Rainbow Quartz to bring you yet another terrific clip! As always, we have plenty of copies of Babylon Fading, so please don’t hesitate to get in touch to secure your copy! If you need more info, call Andy Gesner at 732-613-1779 or e-mail us at info@HIPVideoPromo.com.