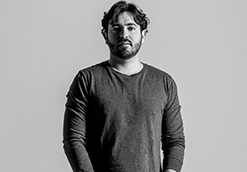 The saying goes that a picture is worth a thousand words. With his new video for “Reveries,” Lucas Ray Exp has crafted an instrumental track that needs no words to connect with viewers as a visceral, artistic showcase of his talents.

“Reveries” is the lead track from his debut EP, titled SPHINX, a brilliant collection of songs that capture his greatest influences; amazing guitarists and timeless progressive rock and metal composers. The EP unabashedly gives a nod to progressive rock composers and guitarists that have helped shape his sound since his youth. A youth that included being born in São Luís (MA), but raised in various cities in the USA and Brazil. The one constant amongst all of this change was his guitar, which he spent endless hours practicing, even during the little free time he may have had while he also pursued his studies in engineering.

It is with “Reveries” that he perfectly captures the diverse upcoming and influences that have shaped him. Set in a dark room with nothing but a singular light behind him, the video begins with a smooth, jazzy variety that swings between tempos and melodies, soothing the ears. But just when it seems like we’ve got his sound pegged he switches gears entirely and plows headlong into a full embrace of prog rock. After shredding through a variety of licks the song settles into a delicious hybrid of the various styles Lucas celebrates in his music.

It’s a pleasure to have the opportunity to work with Lucas Ray Exp and immerse ourselves in his craft. With a new video for “SPHINX” coming soon, “Reveries” is the perfect opportunity to get on this train, so don’t miss out! Please contact Andy Gesner and the HIP Video Promo team at (732)-613-1779, email us at info@HIPVideoPromo.com. You can also check out LucasRayExp.com for all things Lucas Ray Exp.