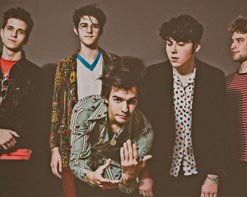 Indie-rock upstarts LuxDeluxe have been rousing audiences and building buzz with a sharp sense of melody and an arsenal of devastating hooks. With the oldest member of the crew topping out at a mere 22 years of age, this band has only just begun to hit its stride. HIP Video Promo is pleased to introduce the fantastic clip for their dynamic lead single, “What You Need.”

Hailing from Northhampton, Mass–not far from the birthplace of Dinosaur Jr. and the Pixies–this young quintet cut its teeth in the vibrant local rock scene and spent the better part of two years developing a new sound for its second album, It’s A Girl. Whereas their previous recordings touched on country and Americana, this time around LuxDeluxe started from scratch, taking cues from greats like the Beatles, NRBQ, and Wilco. Like those bands before them, LuxDeluxe aimed to make an album that worked as a cohesive piece of art played front-to-back. And “What You Need”–It’s A Girl‘s opening track–commands your attention from the start. A loop of primitive 8-bit percussion from a Casio’s memory bank sets the tone and is soon joined by gently pulsing synths. Suddenly, the song goes full-spectrum with the addition of drums, strings, and keys all locked into a moody groove, creating an arrangement as unique as it is gorgeous.

The video–a dark and mysterious adventure starring the lads of LuxDeluxe–is a perfect match for the song’s curious indie charms, drawing us deep into their world. Starting at dusk as rehearsal ends, the clip begins with the band piling into an iconic Chevy Caprice for what proves to be a very busy night. After picking up a female friend whom they find sprawled out in the middle of the road, the band (and their female friend) is seen in a variety of locales including a rooftop, a record store, and a party. And while the rest of the world and his band make the most of it, singer Ned King croons and howls with a look of utter resignation upon his handsome face, selling the song’s sad refrain, “what you need is more than I got.” But if this song is any indication, Mr. King and his crew have more than enough to offer, indeed.

With the release of their latest album and video, LuxDeluxe are officially on the verge and poised to break big. We are very excited to be a part of it. For more information on this great new artist, please contact Andy Gesner and the HIP Video Promo Staff at (732) 613-1779 or email us at info@HIPVideoPromo.com /a>. You can also visit www.LuxDeluxeMusic.com for more info.