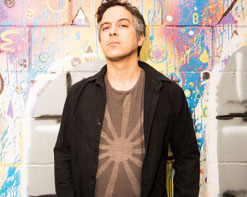 You may know the name M. Ward as one half of the celebrated indie duo She & Him with Zooey Deschanel. Or perhaps as one fourth of Monsters of Folk with My Morning Jacket’s Jim James and Bright Eyes’ Conor Oberst and Mike Mogis.  Now it’s time to shine the spotlight directly on M. Ward the solo artist with the delightfully quirky new video “Girl From Conejo Valley,” from his upcoming new album More Rain on Merge Records.

This album, Ward’s eighth solo affair, finds the artist picking up the tempo and volume a bit from his previous release, 2012’s A Wasteland Companion. Where that record introspectively looked in from the outside, More Rain finds Ward on the inside, gazing out. Begun four years ago and imagined initially as a DIY doo-wop album that would feature Ward experimenting with layering his own voice, it soon branched out in different directions, a move that he credits largely to his collaborators here who include R.E.M.’s Peter Buck, Neko Case, k.d. lang, The Secret Sisters, and Joey Spampinato of NRBQ. The result is a collection of upbeat, sonically ambitious yet canonically familiar songs that both propel Ward’s reach and satisfy longtime fans.

The star of “Girl From Conejo Valley” is the landscape and a few of the interesting characters that make up the area. We meet “Slow Brain” Winterhart, “Slow Thinking” Lincoln, and “Moto-Cycle” Wilson, as well as a sinister red-eyed rabbit that basically sums up Conejo (Rabbit) Valley right there. Each one has their own tale to tell, with each one involving Ward’s old girlfriend knowing them well. Though it is a beautiful spot on the west coast, Ward keeps asking that helicopter hovering above to throw him a line so he can get out!

Between M. Ward and Bob Mould, Merge Records is dropping some of the best indie rock solo records of 2016 and we’ve got them both here at HIP Video Promo. We’d love to hook you up with a copy of More Rain or to get you out to see M. Ward when he comes to your market, so please get in touch with Andy Gesner and the HIP Video Promo team at (732)-613-1779 or email us at info@HIPVideoPromo.com . You can also visit http://www.MWardMusic.com/ or http://www.MergeRecords.com/.