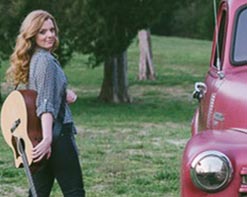 A guitarist, pianist, and lyricist with a stunning voice to match, Madeline Smith is a young country artist on the rise. At the age of 15, she put together a band and cut her teeth playing cover songs. Only a year later, she journeyed from her home state of New Jersey to Nashville, Tennessee to work with producer Kent Wells on her debut album. Released last summer, the self-penned album was met with early acclaim and led her to opening spots for Lauren Alaina and Darius Rucker. Her single “State of Mind” hit #16 on the UK country charts, and she was a presenter and performer at the 2013 British Country Music Awards. Her current single, Catchin’ Fireflies, was just released and is already charting at #21 on the UK country charts, and she has again been asked to be a performer at the 2014 British Country Music Awards. The future seems wide open for this young talent, as she prepares to relocate to Nashville this fall. In the meantime, HIP Video Promo is very pleased to present the wistful clip for her latest single, “Catchin’ Fireflies” as well as the anthemic clip for her first hit, “State of Mind”.

While only 17, Smith’s dedication and hard work has led to a hectic schedule that had her longing for lost innocence of an earlier time. A sweet and upbeat song, “Catchin’ Fireflies” finds Smith lamenting the demands and pressures of adulthood and longing for life to slow down over twinkling piano, mandolin, and strings. An ode to the simple magic of youth, she sings, “I miss long, hot summers hanging with my friends / playing outside till mama called me in.” The video depicts a young Madeline and her childhood friend enjoying the lazy afternoon, riding bikes, jumping in the lake, and catching fireflies. With a poetic perspective that defies her young age, she sings “Wish I could’ve stayed that age / when grown’ up seemed an eternity away / it’s amazing how fast time goes by / i wanna go back to catchin’ fireflies.” Subsequently, we see the grown up version of the childhood friend persuade Smith to leave her busy recording schedule and desk of open books to join him outside for some summer fun where the two of them follow in the footsteps of their childhood and relive precious memories.

In contrast to the tender vibe of “Catchin’ Fireflies”, “State of Mind” is a rockin country anthem. Born from her experience as a Country artist born and raised in the Northern state of New Jersey but with deep southern roots in Louisiana and Mississippi, Madeline shatters your preconceived notions of what Country is about with this kick butt rockin song. The clip begins with Smith pulling up to a gas station in her pickup truck, and stepping out in her cowboy boots and leather jacket. The attendant looks at her funny before saying, “You don’t look like you’re from around here.” He, however, is mistaken. This Country girl is Jersey-born and Jersey-strong. She happens to be on her way to an awesome country cookout where she and her band rock the event with her powerful vocals and stunning performance. There’s southern grub, potato sack races, ATVs, and a cowboy boot piñata. (Did I mention this is all taking place in New Jersey?) The song is full of quotable lyrics, but her main point is that Country can live anywhere. She sings, “It don’t matter where you’re from / If you drive a truck or own a shotgun / you know everyone will treat you fine / ’cause country is a state of mind.” Or, to put it another way, “Oregon to West Virginia / All got a little redneck in ya.”

Here at HIP you know we ALWAYS look out for our fellow Garden State musical kindred spirits, and humbly ask for your ears and eyes to pay special attention to this youthful and endearing talent. For more information on this enigmatic up-and-coming Country artist, please contact Andy Gesner at (732) 613-1779 or e-mail the HIP Video Promo Staff at info@HIPVideoPromo.com . You can also visit www.MadelineSmithOfficial.com/ for more info.