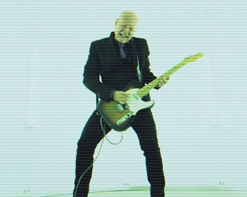 It’s Andy Gesner and the HIP Video Promo staff, here intdoucing a Minneapolis rocker who performs with a full band under the moniker Magneto Effect. “Pretty Little Ball” is a dazzling clip not only features a sexy trio of showgirls seducing the camera but also the work of one of our personal favorite video directing talents, Justin Staggs.

Magneto Effect is the lovechild of humble yet explosive singer, songwriter and multi-instrumentalist Jeph Joolik, who writes and performs almost every segment of what you will hear from this versatile artist. Drawing inspiration from artists like The Cars, Joy Division, Tom Waits, and Kate Bush, Magneto Effect rocks like a concoction of Radiohead-meets-Flaming Lips, drawing in the best elements of weird and catchy together into one harmonious existence. The song is a gradual buildup of various layers, starting from simple palm muted guitars and drums, to eventually explode into a Prince-like array of emotion and pop layers that are as cacophonous as the ultimately pleasing and satisfying. Magneto Effect have yet to drop their first single upon the masses, but have already scheduled several touring dates in the proximity of their home state of Minnesota. This is a good sign that this band is one you will be hearing of more in the near future, as they have organized their art of war from the very inception of the project.

“Pretty Little Ball” is a visual treat for all. With respected director Justin Staggs (Foo Fighters, Against Me, NOFX, No Use For A Name) at the helm, you can expect a fully realized artistic vision straight off the bat. This colorful clip ventures into the life of an underworld crime boss in the form of a ventriloquist dummy with a particularly destructive brief case (it’s got a big red button that can do some really bad things, like end the world with a nuclear strike), who offices in a peep show booth. He is entertained by three striking showgirls, each of whom represents a sin: greed, violence and gluttony. As the crime boss starts to reach his pinnacle, he also begins to rub the big red button. If there’s something we’ve all learned from the movies, it’s that no matter what the situation – never touch the big red button… ever. So what happens when he inevitably does, satisfying our curiosity? Well, to put it simply: all hell breaks loose! Bombs start dropping from the sky and the girls are sent spiraling into orbit, while performing aerial acrobatics. This bit of visual delicacy will make you think just as much as it will catch your eye with its razor sharp edges.

Magneto Effect’s “Pretty Little Ball” is a grand representation of Justin Staggs’ visual versatility and a sonic leap for modern rock songwriters everywhere. We invite you to be among the first to inform the nation about this exciting musical project. We’ve got lots of Magneto Effect swag available for you to give out to your viewers, so be sure to let us know if you’d like some! If you need more info, call Andy Gesner at 732-613-1779 or e-mail us at info@HIPVideoPromo.com. You can also visit www.tinyurl.com/MagnetoEffectMusic to find out more about Magneto Effect and any show dates near you.