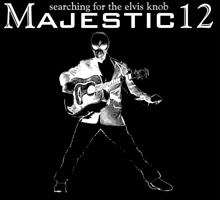 Springtime greetings to all my video programming pals! It’s Andy Gesner and the staff from HIP Video Promo, back once more with another great clip from an independent artist. We’ve known North Carolina’s Kenyata Sullivan for years – as an ace guitar player and singer, as a truly independent spirit, and as the driving force behind the WE Festival. For years, Sullivan and the other members of The Majestic Twelve have been waving the indie rock flag as zinesters, organizers, and musicians. Kenyata’a Wilmington Exchange Festival– held in Wilmington each Memorial Day weekend from 1996-2004 – was a five day nonstop love-fest and celebration of independent spirit hailed as “heaven” by slack-jawed visitors and Carolina scenesters alike. WE Fest has become legendary among those who’ve attended it, showcasing such amazing bands as Mooney Suzuki, The Dismemberment Plan, Mae, Val Emmich, Mountain Brothers, Lamb Of God, and many other successful acts before anyone else was paying attention to them. Kenyata Sullivan is the man who has breathed the life into the legend.

It is a sad truth that community-minded musicians are often so lauded for their local activism that their own work becomes a sidebar. We’d hate to see that happen to Sullivan and the majestic twelve, because he is a hell of a songwriter, and his sterling recording efforts deserve as much attention as his scene-building does. WhileSearching For The Elvis Knob is dedicated “to every hometaper who busts his or her heart to build a community of musicians who genuinely give a shit,” it sure doesn’t sound like a basement tape. Instead, it leaps from the speakers with bold energy, good-humored eclecticism, and off-the-wall, colorful lyrics. Sullivan plays most of the stringed instruments in the majestic twelve, but drummer Peter Gottovi, guitarist Alex Alexander, and guitarist Joey Stewart (all WE Fest veterans) keep the proceedings bouncy and tuneful.

“I Don’t Have A Job” is a slice of bright, infectious Housemartins-ish pop – a slacker anthem and lighthearted self-justification that will resonate with any free spirit. Sullivan sings the song in a rapid-fire delivery that is at simultaneously inviting and self-mocking; his voice is warm, friendly, and reedy, and crackles with personality. If some might argue with a pop song that breaks from a freewheeling string of associations to deliver the inspirational verse “jagermeister, jagermeister, jagermeister, yeah!”, we’d prefer to raise a glass with the inspired writer.

The clip for “I Don’t Have A Job” shares with the song a sort of vicious whimsy and an impish disregard for authority. Shot in grainy, faded color and put together admirably by director Brian Rainey, the video satirizes the stern safety films shown to students in elementary schools. Ostensibly, it’s a “the majestic twelve Bicycle Safety” PSA – but the people riding the bikes are wearing monkey masks, and pedal with utter disregard for the perils that surround them on the street. We watch them blithely plough into trucks, fall into manholes, and disappear under the mashing front wheel of a steamroller. Of course, we’re never shown the collisions – instead, Rainey cuts to a comic-book single-panel illustration meant to suggest violent impact. Paired with the upbeat song, the cartoonish pratfalls feel parodic; like a nose thumbed at party-pooper teachers and those who equate willful unemployment with mortal danger.

We are so excited to working with the majestic twelve and our musical kindred spirits from Wilmington, NC. We have plenty of copies of Searching For The Elvis Knob if you are interested in setting up on-air giveaways for your viewers. We are all about this terrific musical force and here for you no matter what you need to help break this deserving band in your market. If you need more info call Andy Gesner at 732-613-1779, or email info@HIPVideoPromo.com.