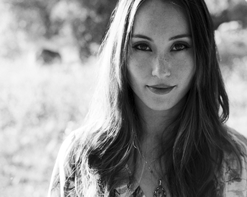 Malea had no idea when she arrived in Los Angeles that she’d wind up writing songs and performing them professionally, much less touring and opening for artists such as Liz Phair and Kenny Wayne Shepherd. Throughout the years she has been working with high-profile producers such as Mark Needham, known for his work with The Killers and for Malea’s recently released album Prism. With comparisons to Rosanne Cash, Sheryl Crow and Paula Cole, it should also be noted that Malea’s voice has been heard on Broadway, MTV, and radio stations and stages throughout the country.

After years of hard work on Broadway and television sets, Malea’s first visit to Los Angeles enticed her to relocate from New York where she began teaching herself to play guitar while attending songwriters’ nights and open mic at local clubs. Eventually, she was ready to record her first album, 2008’s True Believer, which landed select songs from the album as features on adult contemporary and AAA radio airplay. Malea is also known for renditions of tunes such as the Allman Brothers’ “Midnight Rider” and the Alice Cooper ballad “I Never Cry.” While on tours with Kenny Loggins, John Waite, or Rusted Root, Malea has always been able to support a passion of hers—animal rescue—by donating tickets and instruments, and making videos to help raise money and awareness.

Directors Masood Dashtban and Mohsen Bizar kept Malea’s views toward animal rights in mind as her video “Running in the Desert” was created. The video is focused solely on one of the most majestic of all animals, a horse. Filled with stunning scenes of thoughtful character modeling and animation, the clip translates Malea’s empowering lyrics into every scene itself. What begins as a dreary video ends with an inspiring scene of hope and happiness. “Running in the Desert” is Malea’s way of spreading her hopes and dreams for the safety of animals and their future.

While “Running in the Desert” has an organic rock and roll vibe, the original version of “Rainbow Girl” from the Prism album has a pop-laden electronic beat behind it and oozes a catchy melody, invoking a vibe not unlike Madonna’s “Like A Prayer.” The common thread is Malea’s soothing and powerful vocal delivery. When she teamed up with the Papercha$er collective to produce a remix for “Rainbow Girl” they approached with the same mission statement that Papercha$er puts on all of their work; “to make people dance while creating the highest quality dance music possible.” Mission accomplished! The song retains all of the fluid vocal delivery and melodies that make the original so desirable but they’ve upped the dance factor to a considerable degree. The low end thumps and the high end paints an energetic cornucopia that pushes this already outstanding song into the stratosphere.

It’s only appropriate that the video for “Rainbow Girl” possesses a cosmic look to it. “Running in the Desert” proved that Malea was capable of delivering top notch visuals, and “Rainbow Girl” takes that proclamation and takes it to another level. With a regular visual of both rainbows and prisms, the video seamlessly glides through a digital galaxy of stars, planets, and everything in between. It does come back to earth at times to treat us to scenes of silhouettes dancing, large crowds losing themselves in the music, and waves that pulse to the beat of the music. While “Running in the Desert” was focused on a solo element, “Rainbow Girl” is a far reaching treat that takes everything we know about Malea and super sizes it for a presentation that is easily the brightest and most colorful video you will encounter this year.

With her latest album Prism’s recent release, Malea’s musical career is surely rising. Be sure to catch up on your latest news regarding this amazing new artist by contacting Andy Gesner and the HIP Video Promo staff at (732)-613-1779 or email us at info@HIPVideoPromo.com . You can also visit www.MaleaMusic.com for more info.