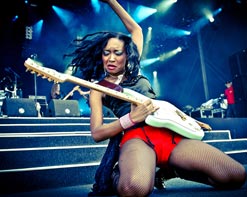 Flipping a Fender Stratocaster upside-down, acclaimed singer/songwriter/lefty guitarist Malina Moye fills a void in the entertainment industry. Described as a modern day renaissance woman, she’s a quadruple threat, carving out her own lane in today’s music scene as one of the few artists in history able to straddle both Rock and Soul genres. Moye’s musical narrative boasts an impressive resume that includes making history as the first African-American woman to play the National Anthem on guitar at a professional sporting event, all the way to performing at the Rock & Roll Hall of Fame tribute concert for music pioneer Chuck Berry. And recently, Malina was praised by Jet Magazine as “the highlight of the evening” after she headlined the largest peace concert on the west coast with Chaka Khan honoring the legendary humanitarian Stevie Wonder.

With an electrifying stage show, Malina delivers an intoxicating fusion of funk, and Rock. Her critically acclaimed LP “Diamonds & Guitars” reached number 35 on Amazon.com and iTunes respectively and a number 50 slot on the Billboard album charts, showcasing an eclectic pallet of music while preserving its mainstream appeal. Abroad and stateside, Moye’s Diamond & Guitars tour served her as an opening act with Robin Thicke, and legendary rock group Journey.

She’s following all that up with her newest release, Rock ‘N Roll Baby, which has given us the first single “K-yotic.” With this kind of track record it’s no wonder that Malina has enlisted famous friends to help deliver one wild ride of a video! Bassist extraordanaire and James Brown and Funkadelic, as well as Rock and Roll Hall of Famer Bootsy Collins joins Moye on the track. He’s also brought along his fellow bandmate, drummer Kash Waddy.

With this cast of characters we are guaranteed to have a wildly good time. “K-yotic” tells the story of Malina and her chaotic life, when all she really wants is to catch a break. The video begins with a down and out Malina walking away from another dead end job. She find the aptly title K-yotic Energy Drink machine and one sip suddenly transports into a funky and colorful reality, all under the watchful eye of Bootsy Collins, who acts acts as kind of funky godfather. The video is bright, vibrant, and infectious, all of the qualities we’d expect to get from an artist as dynamic as Malina Moye.

It’s our distinct pleasure to have the opportunity to with such an accomplished artist of a grand magnitude! Please get in touch and let us know if there is anything we can do on our end to get the new Malina Moye “K-yotic” video into your programming. You can also contact Andy Gesner and the HIP Video Promo staff at (732)-613-1779 or email us at info@HIPVideoPromo.com . You can also visit www.MalinaMoye.com/ for more info.