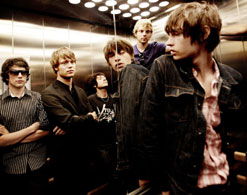 Hello cherished programmers far and wide! It’s Andy Gesner and the staff from HIP Video Promo, back with another exciting clip from an international rock n roll band poised to break through in America. Scandinavia means “pop” to most stateside music listeners, but as The Hives, Peter, Bjorn and John and others have proven, there’s a thriving, Sixties-influenced garage rock scene north of the Baltic Sea. Mando Diao has been a star attraction in Sweden for most of this decade, and they’ve performed in Japan, the U.S., and all over the European continent; they’ve toured with The Bravery and the Dirty Pretty Things, and a slot has been reserved for them at the massive Coachella festival this summer. Their latest set, Ode To Ochrasy, is so undeniable that transatlantic success now seems inevitable.

The new album is a chronicle of odd characters, off-the-wall experiences, late-night reflections, and party scenes that the group has encountered during two years of touring. “Ochrasy”, a word invented by the band, is both a state of mind and an ideal to be achieved. “It’s that hallucinatory world you enter around four and five in the morning”, explains singer and co-frontman Björn Dixgard, “a sort of utopian world where anything can happen, where everything is allowed.” (“Mando Diao” is also a coinage, having come to Dixgard in a dream.) With Ode To Ochrasy, Mando Diao has captured that state in music, pairing psychedelic blues with Nuggets-style guitar-punk – and bringing in the legendary Owen Morris to mix a few tracks on their latest album, crank the volume knobs, and add a Definitely Maybe sheen to these sessions.

The band has never sounded better: spiky, scalding and impossibly energetic. But it’s the relationship between singers – smooth Dixgard and brash, boozy Gustaf Noren – that makes Mando Diao so characteristic. The vocalists trade lines, respond to each other, switch off verses, harmonize, shout in unison, and engage in an album-long dialogue that brings out the best in both of them. Rarely have rock co-frontmen sounded so in tune with each other: there’s a sense that this must have been what it was like to see the Beatles at the Cave in Hamburg; back when Lennon and McCartney seemed like two different manifestations of the same will. “Long Before Rock ‘n’ Roll”, a song that enlists music history to make its points, is a stellar example of the alchemy that these two vocalists can create. Each plays his part perfectly, sweetening and roughening the song where necessary, generating friction and heat, and drawing listeners deeper into the middle of the party.

Daniel Eskils is generally recognized as one of the best young video directors in Scandinavia: he’s worked with Dungen, I’m From Barcelona, and Håkan Hellström, among others. He specializes in Ochrasy – his clips have a dreamlike, after-the-party vibe to them. Thus, Eskils was the natural choice to shoot the video for “Long Before Rock ‘n’ Roll”. He concentrates on capturing the personalities of the two Mando Diao singers, and both Noren and Dixgard come off charismatic, camera-friendly, edgy and urgent. But there’s weirdness here, too, including a car door that drives by itself, some backseat mystery, and a pervasive air of destabilization and drug-altered perception. And there’s no doubt that the band is generating the bizarre effects themselves – just by doing what they do – or that they are the masters of their own dreamscapes.

Big thanks to our new pals Ellena Osis (Ellena@Mute.com) and Cameron Cook (Cameron@Mute.com) at Mute Records for making us part of the Mando Diao team. We have plenty of copies of Ode To Ochrasy for all of your giveaway needs and the band will be touring the US this spring, including a scheduled appearance at SXSW, so if you’d like to set up an interview when they’re in your area, or get your hands on their disc, please let us know. If you need more info, call Andy Gesner at 732-613-1779 or e-mail us at info@HIPVideoPromo.com. You can also visit www.Mute.com or www.Mando-Diao.com to find out more about Mando Diao.