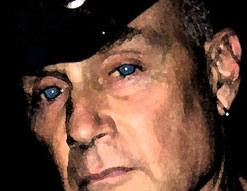 Hello programming earthlings, it’s Andy Gesner and the HIP Video promo staff to report that we come in peace and that we’ve got a great new clip of celestial consistency for your viewing consumption. Here with the easy flowing and ambient “Personal UFO,” is the talented cosmos-bound Manny Freiser. Freiser’s introduction to the science of rock n’ roll contributes back to the 1960s, you know, before Will Smith saved the planet, when the world was experiencing the much welcomed invasion of Elvis and Ricky Nelson. Having been influenced by both of these artists as a child, Manny has spent his years rocking the charts and working the industry amongst some of the greats.

Manny Freiser’s music industry conquests date back several decades. In the 60’s, he penned the cult classics, “Let’s Talk About Girls” and “Cry A Little Longer,” which in turn partly inspired 80’s punk, and are still receiving airplay globally. Freiser also released “Hello Stranger,” a Billboard Hot 100 single with Patti McCarron as Fire & Rain. In the 1980s, Freiser assumed the identity of Ian Messenger, producing the college charting MTV staple, “Livin’ In The Night” while working as a marketing executive for A&M Records and Quincy Jones’ label Qwest. Now Manny Freiser is ready to for yet another comeback under his original identity with his stellar new entry “Personal UFO.”

Despite his classic roots, Freiser embraces the modern pop sound fully and whole-heartedly. The song flows in the medium of rock ballad meets R&B, featuring guitars and Akon/T-Pain’esque vocal effects in harmony and union. This unlikely pairing creates a familiar, yet fresh combination that fans of old and new styles of music can sink their teeth into. The video follows a similar motif, starting off with classic UFO invasion footage and evolving into a modern tale of extraterrestrial love. “Personal UFO” follows the emotional turmoil of young man who yearns for a beautiful girl that might or might not be from this planet! While she spends most of the video avoiding his embraces, she later gives when her ship drops her off near his house. The viewer is always left wondering whether the girl is real or whether there is, in fact, life elsewhere in the universe. Manny hasn’t lost his touch for thought-provoking music either; under it’s extraterrestrial surface, the song is a serious comment on the ins and outs of relationship– commitment (landing vs hovering), what’s real and what’s fantasy, love vs lust…

“Personal UFO” is the leading single from Manny Freiser’s latest album Believe. The record explores a numerous variety of styles and textures ranging from the Rolling Stones to the constantly rolling and changing styles of today. This is no small task, but considering Manny Freiser’s firsthand experience, he is the right man for the job. It is also quite awe-inspiring to know consider the fact that Freiser has engineered, produced, and mixed this recording solely by himself.

We are very excited to turn your attention onto this multi-faceted and seasoned artist, whose work is much demanding of your attention. Manny Freiser has provided us with copies of Believe for giveaways and contests, so be sure to let us know and we will send some your way. If you need more info, call Andy Gesner at 732-613-1779 or e-mail us at info@HIPVideoPromo.com. You can also visit www.MannyFreiser.com to find out more about Manny Freiser.