Maps “To The Sky” 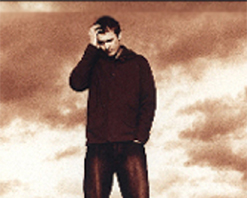 Hello programming pals, it’s Andy Gesner and the staff from HIP Video Promo bringing you the third video from an artist who has become very near and dear to us. A few months ago, it was our great pleasure to send you the clip for “You Don’t Know Her Name”, the second single from the heralded We Can Create. Toben Seymour’s empathetic tale of the giant dancing mannequin (and the scientist who animated her) at a local dance contest has stolen the hearts of everybody who’s watched it. The “You Don’t Know Her Name” clip has become one of the most talked-about underground videos of the year – one that has made waves and won fans on both sides of the Atlantic. Since its debut, fans of James Chapman and the maps project have openly wondered how on earth he’d top it. Well, maps is back for an encore, and we’re pleased to report that the “To The Sky” video is every bit as bewitching, gorgeous, and profound as the now-famous clip that preceded it.

But that’s hardly a surprise to us, since Chapman’s music invites inspired interpretations. We’ve been listening to We Can Create for months now, and we still haven’t plumbed its depths. maps makes lush, meditative, and resonant music – reminiscent of the best of Ride, Spiritualized, and Loveless-era My Bloody Valentine – and Chapman pairs his hypnotic soundscapes with thoughtful, provocative lyrics. Some tracks, like the experimental “Don’t Fear” and “Back And Forth”, are near-mantras; elliptical, riddle-like poems set to swirl inside a maelstrom of sound. The album was shortlisted for this year’s Mercury Prize, and an enthusiastic reception by U.S. critics has helped establish maps as a British import to look out for.

“To The Sky” is, arguably, the centerpiece of We Can Create. This is Chapman at his most moving, imploring the fates for answers to incalculable questions. “I could sing it to the sky,” he sighs in the chorus, “but there’s a risk it won’t reply”. The video for “To The Sky” explores this feeling of helplessness that comes from standing the unknown, and does so cleverly and with winks to the audience and to film history. Nodding to Signs and 2001: A Space Odyssey, the clip blends sci-fi with traditional pop video iconography, creating something most comparable to the celebrated clip for “You Don’t Know Her Name”. Once again, maps has found that strange seam where science meets mysticism and wonder.

There’s no obelisk on a hillside in the “To The Sky” clip – instead, we’re shown a gigantic metallic egg in the middle of wheatfield. There’s a slot on the side of the egg, and an odd screen on its side. Penitents bringing letters walk through the field and congregate before the egg; they stare up at it in wonder and awe. One by one, they feed their missives into the slot – and as they do, the alien intelligence takes over, and their questions are projected, letter by letter, on the screen for everybody to see. Many are personal, most are moving, and all are unanswerable. These are queries flung at the feet of a cold and impersonal universe, but each supplicant burns for a response. Finally, the egg prepares an answer for the crowd, and when it comes, it isn’t what any of the questioners were expecting. As always, Chapman and maps have a twist for us – they’ve thrived on doing the unexpected, and they certainly don’t disappoint here.

It is our great pleasure to be working with Stephanie Trick and Mark Fotiadis at Mute once. If for some reason you didn’t pick up your copy of We Can Create yet, hit us up here and we’ll be sure to get hooked up with everything you need to make sure maps is getting maximum exposure! If you need more info, call Andy Gesner at 732-613-1779 or e-mail us at info@HIPVideoPromo.com. You can also visit www.Mute.com to find out more about maps.