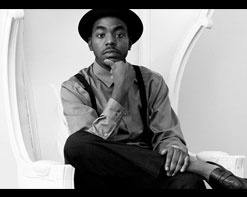 Memphis native Marco Pavé sits at the intersection of hip-hop, arts communities, technology, and local activism, harnessing the power of music to transform his city. As an artist-activist and cultural entrepreneur, he can be found in inner-city classrooms in South Memphis teaching hip-hop, on stages giving TEDx talks about hip-hop, art, and entrepreneurship, and at #4 on the CMJ charts with his EP Perception. His laid-back demeanor and high-energy live performances is lighting a fire with fans of everything from hip-hop purists to radio lovers to hipsters.

Marco Pavé’s first big break came in 2014 when he was invited to L.A. to record his new EP, Perception, with seven-time Grammy nominee Haskel Jackson. Collaborations with Ezi-Cut, TDE engineer James Hunt and Grammy-winning producer Carlos Broady strengthened his work even further, and his new single for “Black Tux” is the perfect example of classic and contemporary hip-hop in one diverse, outstanding package.

“Black Tux” is all about smooth visuals and a classy, effortless presentation, offering an alternative view of Memphis and its place in hip hop. At the core of the video is Marco posted up in an abandoned warehouse, a place southern, industrial, urban, and decaying, delivering his rhymes with a focus and fury matched only by the gravity of the lyrics themselves. As Marco does his part in the present, black and white flashbacks to formative events in life tell parallel stories of choosing passion over paychecks and the hard choices that are brought by unexpected changes in life. Like a visual metaphor, Marco appears dapper and dashing inside the crumbling walls around him, speaking to the possibilities we all have to rise from challenging circumstances. Most importantly, he is true to himself and no fancy set of threads is going to change the man he is proud to be. The video connects to the current millennial youth culture that is attempting to challenge issues of inequality and justice, all while trying to stay afloat and live their dreams in uncertain economic times.

All of us here at HIP Video Promo are very excited to be working with Marco to bring you this truly incredible new single and video. As an artist who is not only musically gifted but also civically minded, he is an inspiration to us all. Whether it be the Books on Beale benefit concert that he founded to promote literacy, performing at SXSW, or being chosen by Memphis mayor A.C. Wharton to create a theme song addressing blight in the city, Marco brings dynamism to his music and activism. Please contact Andy Gesner and the HIP Video Promo team at (732)-613-1779 or email us at info@HIPVideoPromo.com .