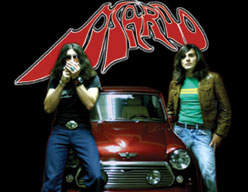 Hello fellow music video lovers! It’s Andy Gesner and the staff from HIP Video Promo, back with a slamming video from a West Coast group that has begun to send shockwaves through the indie rock underground. Armed with a classic sound, Mardo is the rock and roll revival act of the moment. The instruments are vintage, the amplifiers are cranked to eleven, the licks are gold-plated, and the performances boast the passion and energy of the group’s heroes: The Kinks, The Stones, Townshend, Bolan, Bonham, and Ron Wood. It will surprise nobody who has heard that group that they were recently featured inGuitar Player magazine – nor that they spent the interview talking about legendary six-strings and how to capture the sound of Sixties and Seventies recordings.

While the band performs as a quartet, the recording project is a collaboration between siblings Aron and Robert Mardo. The two operate in a perpetual state of productive camaraderie and friendly competitiveness familiar in brother acts – and like Oasis, Jet, and Crowded House before them, Mardo is reaping the benefits of that creative friction. Mardo, their debut for House Of Restitution Records, boasts all of the virtues that landed the brothers’ prior effort (recorded with the band The Spies) on the Billboard charts after selling 30,000 units without major label support or distribution. It’s a masterful amalgam of classic rock styles from scramming boogie to candy coated fuzz-pop. And it features a telling cover version of Huey Lewis’s “I Want A New Drug” that dissolves the original in acid, reanimates the skeleton, and sets its bones rattling.

“Anyone But Me”, the single, is just as ferocious: big riffs, searing lead, Rob’s kickass drumming, and Aron Mardo’s rock-solid bass guitar and gigantic vocal. He can swagger like his forerunners, and channel the strut and stomp of Seventies arena-rock stars just as convincingly as Chris Robinson or Sammy James. Here, he kisses off an old flame with the savagery that only a black-hearted rocker can, slamming the door in her face and burying the key. “Call somebody who cares!”, he sneers, wailing into the microphone in a classic combination of outrage and bravado. The Mardo brothers have the act down, and it’s devilishly exciting to witness.

After playing shows in support of bands like R.E.M., the Violent Femmes, and the Ravonettes, and touring the world, Mardo has become accustomed to broadcasting their message to the masses. Video director Leonard Shields embraces Mardo’s generosity – and gives it a visual representation – by placing the band on the high rooftops of their city. But this is no genialLet It Be concert: the Mardo brothers are angry and defiant, and they hurl their song down to the streets below like a catapult discharging a boulder. Playing in the shadow of a “Jesus Saves” sign, the band does all it can to save itself.

Meanwhile, a young woman on the July-hot street is having a similar reaction to her surroundings. She’s gorgeous, but she’s not dressed as her peers are – she’s got knee-high socks and a short skirt, and she looks like a Catholic school refugee. Other people on the street harass her or look askance at her, yet she still walks with cool determination. Finally, she snaps – and we’re treated to highly entertaining footage of our heroine kicking some serious ass.

Here at HIP HQ we are very excited to be working with our new friends at House of Restitution Records to bring you this enticing new clip. We will have plenty of copies of their terrific self-titled CD for on-air giveaways, along with lots of extra goodies including posters, buttons, and very cool Mardo lip balm (and it is SPF 15 for all of you sun worshippers)! If you need more info, call Andy Gesner at (732) 613-1779, or email info@HIPVideoPromo.com.