Maria Taylor “Song Beneath The Song” 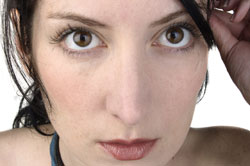 Hello, cherished programmer! It’s Andy Gesner and the staff at HIP Video Promo with the continuing barrage of the best in music videos. We’re proud to be continuing our association with Saddle Creek, a label that has built its reputation by releasing nothing but challenging, intelligent indie rock. And one of the most gratifying things about working with Saddle Creek is the recursively self-referential quality of its roster: musicians regularly play on each others’ records, write and produce together, and blur the traditionally-drawn lines between groups. We’ve discovered firsthand that discussion of the Omaha “family” is not hyperbole, and, like so many fans of these artists across the country, we’ve found ourselves swept up in the internally-consistent Saddle Creek universe.

If you’ve followed the Saddle Creek story over the past decade, you’re well aware that Maria Taylor is a vital recurring character. Her Athens, Georgia-based duo, Azure Ray, signed to the imprint in time to release their third full-length, Hold on Love, making Saddle Creek and Omaha home to their winning and adventuresome dream pop. Taylor has also contributed to Now It’s Overhead, the intriguing project by labelmate Andy LeMaster, and has sung with Bright Eyes and The Faint. Stepping outside the Saddle Creek stable, she’s also worked extensively with Moby, Crooked Fingers, and Athens’ supergroup Japancakes. With 11:11, Taylor is on her own for the first time – and she delivers an inviting, bewitching set reminiscent of the sort of classic, sad songs once favored by the first ladies of American songwriting, but still forward-looking and wholly consistent with the spirit of Saddle Creek music.

Start with her voice – spooky, cotton-soft, seductive, dangerously welcoming. Any song Taylor sings takes on an otherworldly radiance; her tone imparts an aura of mystery and ambiguity to her thoughtful writing. Taylor’s stories are complex, full of double meanings and sinister undercurrents; and her songs frequently disguise disquieting sentiment beneath their tuneful exteriors. 11:11 finds Taylor successfully stretching her songwriting in unexpected directions. While “Xanax” and “Leap Year” are deliriously blurry dream pop akin to the best of Azure Ray, “Speak Easy” is nearly a torch song, and “Song Beneath The Song” is fuzzed-out, immediate, and catchy enough to find a place on hit radio. Finding the song beneath the song – digging down through the music to uncover hidden meanings and buried emotions – is, in a way, the Saddle Creek ethos. So it’s hardly a surprise when Conor Oberst, that veteran miner of the depths of the spirit, arrives to contribute support vocals.

Fans of Maria Taylor frequently suggest that her music glows with an inner light “Song Beneath The Song” is particularly bright and radiant, and its clip is flooded with vibrant illumination. Opening with a shot of the sun through a high canopy of leaves, the video turns to wide shots of a verdant park. Two people – possibly a man and a woman – dressed in full kabuki make-up and clothing, chase each other through the trees. Like Taylor herself, they carry parasols, and use them to twirl around, to fence, and to balance themselves while walking on a fallen log. Their interaction appears to function as a metaphor for the development and the essential give-and-take of human relationships.

It’s all seemingly innocuous and pleasant – until the song arrives at its release. There, Taylor is shot from above; she intones the unsettling chorus while the two kabuki actors lie on the ground as if dead. The singer takes no notice of her companions – instead, she stares up at the camera with eyes as wide as twin suns, and a thoughtful, oddly vulnerable expression. Maria Taylor must be one of the most striking-looking women in indie rock: she’s got the sort of face that fills the camera and is impossible to forget once you have seen it. But if her beauty is undeniable, it’s also a little chilling – like actresses in psychological thrillers, she has the sort of stare that conveys an otherworldly consciousness. She appears to be peering past the camera, and into a great, uncharted beyond.

We are thrilled to be working with all of our friends at Saddle Creek yet again to bring you this compelling clip. We have plenty of copies of 11:11 for on-air giveaways, and are here for you to make sure that all of your Maria Taylor needs are met in a timely fashion. If you need more info call Andy Gesner at 732-613-1779, or email info@HIPVideoPromo.com. You can also visit www.Saddle-Creek.com to find out more about Maria Taylor.