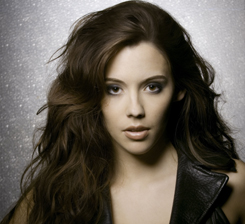 Howdy friends and cherished music video programmers, it’s Andy Gesner and the staff from HIP Video Promo back with another must see risqué video! You may have seen her radiant face already – she’s the co-star of the video for “It’s All Coming Back To Me Now”, the lead single from Meatloaf’s Bat Out Of Hell III. Raven is already a huge success in Japan where her album, Here I Am, debuted in the top 10 in the Japan international charts and throughout Asia. Her single was #1 in Japan on the international play chart. The album has also scored Top 10 positions in Norway and throughout Asia. But there’s a good chance that “Heads Will Roll” is your introduction to Norwegian singer/songwriter Marion Raven, and we expect it to make quite an impression. The young singer has delivered a clip reminiscent of racy mid-Eighties hard-rock classics – yet there’s something undeniably stylish about it, too. There’s enough gorgeous skin shown off in the “Heads Will Roll” video to raise the body temperature and heart rate of even the most shrewish censor, but it’s all so artfully filmed and produced that Raven and her slumbering girlfriends appear statuesque and hypnotic in their beauty.

She’s chosen a collaborator who knows a thing or two about scantily-clad women. “Heads Will Roll” was co-written by Nikki Sixx, who called Marion Raven “the fucking most talented new artist I’ve worked with since I started making music”. High praise indeed from a rock and roll legend – but that’s nothing new for Raven. Meat Loaf and Jim Steinman have raved about her, too, praising her powerful and elastic vocals. On Here I Am, Raven collaborated with an international array of hitmakers and notable rockers: Peter Svenssen of the Cardigans, Art Alexakis of Everclear, Canadian confessional songwriter Chantal Kreviasuk and Scandinavian stalwart Max Martin. Marion Raven’s upcoming Heads Will RollEP will be no less star-studded.

And “Heads Will Roll” is a radio-ready rock song – but it’s radio-ready and accessible the way Motley Crue was back in ’85. There’s a dark edge to this music that the sweet melody and big, splashy beats can’t blunt. The guitars crunch, the chorus is huge and muscular, and the singer wraps her voice around the track with authority and attitude. Like many of the tracks onHere I Am, “Heads Will Roll” is a razor-sharp kiss-off to a bad boyfriend; like Joan Jett before her, Raven has a pile-driver lyrical reply to those who’d mistreat her.

The clip for “Heads Will Roll” shows off some more famous friends: Xavier Muriel of Buckcherry hits the skins, and Freddy Herrera and Scott Stevens of the Exies on bass and guitar/backing vocals, respectively. But we won’t blame you if you don’t notice any of these luminaries. It’s not every day, after all, that you get a chance to see a beautiful naked woman singing her song atop a bed of ten other naked women. At first, the clip just teases us: the shots of the eleven girls are fleeting, and it’s hard to tell exactly what’s going on. But we’re getting afforded the view through the peephole – that rectangle cut in the aluminum walls of the chamber where Marion Raven and her friends are laying together like puzzle pieces. By the final chorus, the camera lingers on the bodies of the girls. It’s naughty for sure, but it’s also celebratory: a declaration of comfort and independence for a young woman who’s grown up under the media spotlight, and who continues to deserve all the attention she gets.

It’s our pleasure to work together once again with Jason Spies and all of the fine folks at Eleven Seven Music. You can be sure that we will have plenty of copies of the Heads Will Roll EP for all of your on-air giveaway needs. We’ll also be happy to set you up for video interviews when Marion Raven is in your town. If you need more info, call Andy Gesner at 732-613-1779 or e-mail us at info@HIPVideoPromo.com. You can also visit www.10thSt.com or www.Marion-Raven.com to find out more about Marion Raven.