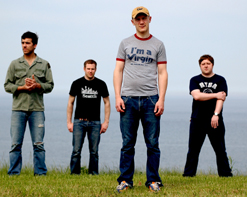 Hello to all of my indie rock loving friends! It’s Andy Gesner and the staff from HIP Video Promo, here with an artful and engrossing clip from one of indie rock’s most distinctive songwriting voices. Don’t let his casually approachable demeanor throw you: Davey von Bohlen is a major talent. His writing for The Promise Ring was so immediate and vibrant that its versatility wasn’t immediately evident to the band’s large fanbase. The emo underground claimed the Ring as its own, as did the punks, and the indie kids, and even some roots-rockers. But by the time the Milwaukee quartet released its now-classic albumNothing Feels Good, it was clear that von Bohlen’s vision transcended genre categories. The final Promise Ring releases confirmed what the group’s true fans already knew – Davey von Bohlen was as comfortable with laid-back pop melodicism as he was with punk fury. Vermont, his first post-Promise Ring combo, extended his reputation for laid-back eclecticism; it was also irresistibly tuneful, and, as always, emotionally evocative

It’d be wrong to call Maritime his best outfit yet – he’s recorded with too many terrific bands (including Jimmy Eat World, whose “A Praise Chorus” features his enthusiastic singing) to make such a snap judgment. But it does seem accurate to suggest that von Bohlen’s latest project is the fullest realization of his vision. Maritime makes pure guitar pop, steeped in the traditions of leftfield punk and college rock. On the winning Heresy And The Hotel Choir, the frontman shares songwriting duties with drummer Dan Didier (also ex-Promise Ring), bassist Justin Klug, and guitarist Dan Hinz – and he sounds positively liberated, singing with an ease and confidence he’s never approached before. “Guns Of Navarone”, the lead single, epitomizes the new approach: it’s simultaneously classic and modern, familiar and astonishing. “Thanks in large part to its spring-loaded rhythm guitar, excellent lead hook, and percussive romp,” raves Mike Hilleary of PopMatters, “the track moves along like some bewitched rubber ball that just can’t get rid of its bounce.”

The video-directing team of Jon Troutman and Julian Acosta (Headlights, Tilly And The Wall) are well-known for their sharp and subtle use of color and computer animation. Their clip for “Guns Of Navarone” is typically expressive. Vibrant watercolors wash across the screen, melding and parting like Rorschach tests in motion. A shot of Maritime in performance is distorted by black inkblots; they fall on to the image as if shaken from a fountain pen, run toward the bottom of the frame, and soon overwhelm the picture. The musicians are shown as sketches of in bright color, line-drawings; they snap into focus, and quickly fade to the white of an artist’s canvas. Later, cut-outs of Maritime in performance are superimposed over striking backgrounds: a thicket of grass, an array of multicolored cables, a wall of old television sets. It’s all wonderfully evocative – a trip through a box of oils or pastels, scored by a band with a painter’s appreciation of texture, mood, and negative space.

We are very pleased to be working with James Kenler, Jesse Woghin and the Flameshovel team to bring you this stunning new video. They have been kind enough to hook us up with plenty of copies of Hersey and The Hotel Choir for your on-air giveaway needs so please be in touch if you’d like to get your hands on some of them! If you need more info, call Andy Gesner at 732-613-1779 or e-mail us at info@HIPVideoPromo.com.