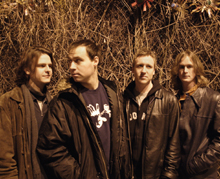 Kindest regards to everyone in the music video community! It’s Andy Gesner and the staff here at HIP Video Promo, back with another independently-produced video by an emerging band. One of our favorite things here at HIP is to watch a local group rise to prominence through perseverance and talent. It’s been our great pleasure to watch the development of Marwood, a NYC-area four-piece with terrific songs, a bright, radio-ready sound, and an instantly winning demeanor. In the past year, the quartet has graduated from small hipster Manhattan clubs and taken their places on the city’s most prestigious stages – including the Knitting Factory and The Bowery Ballroom. They’ve also hit the road and covered more than 10,000 miles during a tour that won them passionate fans across America. Commercial radio stations – including Q104.3 – have caught on, and have spun tracks from the band’s new independently-released CD. (The quartet was named one of the best local acts by the classic rock station). Flush with that heady feeling that comes just before the culmination of a musical project, Marwood is a band poised on the brink of a breakthrough – and we’re thrilled to be able to share that excitement with you.

The key to Marwood’s success is the tight, organic relationship between the four players, each of whom suitably complements his bandmates, and all of whom contribute the warmth, infectious enthusiasm, and subtle-yet-inspired musicianship that listeners have come to expect from the group. Singer/guitarist Benji Rogers and guitarist/singer Rob Overbey have been making music together for years – they met in Los Angeles, and transplanted the act to New York City after playing shows at the Roxy and Whisky-A-Go-Go – and sound as though they were born to raise their voices in harmony. The tight, potent rhythm section of bassist Brett Conti and drummer Mike Talbot raise the stakes by turning Marwood’s catchy pop songs into legitimate modern-rock anthems. Marwood’s kick-off track “Can’t Say” is so Stonesy-uplifting and raucous that it might take you a few exhilarating passes to notice how excellent the songwriting is.

“Monday Over Friday”, on the other hand, wears its compositional craftsmanship proudly. An aching mid-tempo ballad, it’s an ambivalent love letter sung by Rogers to the object of his affection. The band adds the pop sweetening, setting the song afloat on a cloud of harmonies, melodic riffs, and pure ear candy. This is the endearing version of Marwood: winsome, compelling, sugar-sweet with a classic rock edge.

Jeremy Yuricek’s clip for “Monday Over Friday” literalizes the song in the most direct manner possible – the band is shown in a living-room practice space, playing and singing to a red telephone receiver that is resting off of its cradle. At the other end of the line, a barefoot young woman sits on the floor of her room and listens to Rogers’ entreaty. Her expression is tough to read – but a series of soft-focus flashbacks make it clear that this isn’t the most glorious day in her relationship with the Marwood singer. He could be apologizing for misbehavior, or just trying to win her back; in any case, he puts his band’s easy sincerity to work for him as he lays the song in front of the mouthpiece, flat and earnest as an open question.

Here at HIP we are very excited to be teaming up with the cool folks at Feckless Music to bring you this gripping new clip. We have plenty of copies of Marwood for on-air giveaways, and the band will be touring voraciously throughout the next twelve months. If you need more info, call Andy Gesner at 732-613-1779 or e-mail us at info@HIPVideoPromo.com.