Mason Proper “My My (Bad Fruit)” 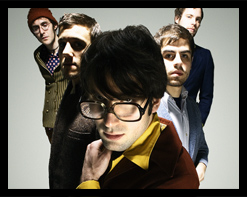 Summer salutations, cherished music video programming friends! It’s Andy Gesner and the staff from HIP Video, back with another strange and fascinating clip from a cool new band that’s impossible not to cheer for. Here at HIP, we love groups that take chances – and Mason Proper is about as gutsy as young rock bands come. Viewed from a certain angle, There Is A Moth In Your Chest, Mason Proper’s debut, is just a terrific rock album: well-built songs, great melodies, intriguing lyrics, spirited performances. But listen a little harder, and the band’s startling collective imagination becomes evident. This Michigan quintet loves off-kilter sounds and haywire synths, stuttering electronics and frenetic percussion – and when they build a song, they make sure there’s space for their wild flights of fancy. No two Mason Proper songs sound the same, but they all bear an aural signature: a kind of musical intelligence, dark humor, playfulness, and a will to amaze listeners.

There Is A Moth In Your Chest is a bracing ride. Songs twist and turn, dissolve and re-form, flit between genres, weave through verses and combust into choruses. Each track seems to contain secrets, and almost all of them contain elements unusual to rock songs. “Blue Lips Eternal Inquiry” is bathed in lush strings, “The World Is Smaller Than You Think” is animated by a rogue shaker, a berserk analog lead runs through the electrifying “Lights Off”, and “Mr. Charm” is all sharp angles and ricocheting beats. Lead single “My My (Bad Fruit)” is probably the most traditional rocker on There Is A Moth In Your Chest – but even this radio-ready track is spiked by renegade electronics. Singer and songwriter Jonathan Visger’s language is often dense and provocative, and here, it’s especially so: the song is crammed with apocalyptic and unsettling images. Yet the energy is explosive and the melody is infectious, and the song has become a favorite of Mason Proper’s rapidly-expanding fanbase.

As you’d expect from a band that makes music as propulsive as There Is A Moth In Your Chest, Mason Proper tours constantly. This summer, the quintet will be swinging through the Midwest and Northeast, sharing bills with Ra Ra Riot and Jason Isbell. The clip for “My My (Bad Fruit)” catches Mason Proper in performance, too – but this is no ordinary gig. For starters, the band performs in an open field and under a blue sky. This is an outdoor wedding of sorts, but at first, it’s unclear who’s getting married, or why the musicians in the band seem more battered and bloodied with each subsequent shot! The bride, by contrast, looks healthy and poised in her gown and bone-white makeup, and her ladies-in-waiting gather about her, conspiratorially. In the hills behind them, a gigantic faceless conductor waves around his baton, generating atmospheric turbulence as he does. He seems to be somehow associated with the bride – because she, too, commands the air, shooting lightning-like squiggles from out of her eyes! The members of Mason Proper struggle with that same energy, attempting to tame it, but largely getting buffeted by it. Finally, Visger’s bandmates prop his battered body up and lead him to the middle of the field, where his dangerous betrothed awaits him.

Many thanks to Carter Matschullat and the crew at Dovecote Records for bringing us on board as a part of their promotional team! They have been most excellent in hooking us up with plenty of copies of There Is A Moth In Your Chest for your on-air giveaway needs. The band will also be on tour this summer, so let us know if you’d like to catch them live or catch a quick video interview when they come to your market. If you need more info, call Andy Gesner at 732-613-1779 or e-mail us at info@HIPVideoPromo.com. You can also visit www.DovecoteRecords.com to find out more about Mason Proper.