Mates Of State “Goods (All In Your Head)” 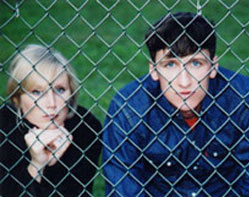 Summer salutations to all of my programming friends! It’s Andy Gesner and the staff from HIP Video Promo, back with a clip from one of the most distinctive and adventurous indiepop bands in America. It’s almost redundant to tell you that it’s our great pleasure to be working with Mates of State. That’s because everything about Mates of State is pleasurable – from the duo’s enthusiastic harmonies to their infectious spring-breeze melodies to the relationship between group members Kori Gardner and Jason Hammel. Gardner and Hammel sing and gesture toward each other so intimately and elaborately onstage that it’s no surprise to anyone who has seen a Mates of State show to learn that offstage, they’re a married couple.

Mates of State’s arrangements are deceptively simple and invariably intriguing – but then they’re an unusual group. Kori Gardner weaves patterns, trills, and arpeggios on a late-sixties Yamaha combo organ, and Hammel hammers away on a vintage kit. If that sounds a little spare in theory, in practice, it’s anything but. Both members sing (and expressively!) throughout most of their songs, trading parts, backing each other up, sustaining an ongoing elliptical dialogue in evocative rock and roll poetry. The classically-trained Gardner has jaw-dropping dexterity and a left hand as versatile as any rock bassist, and the inventive Hammel fills space with drum parts that are both imaginative and technically dazzling. Gardner’s organ sounds crackle, buzz, and twinkle, and impart an ethereal atmosphere and a classical poise to Mates of State’s music. But virtuosic as they are, they nevertheless place their musical gifts at the service of their songs. Bright, delightful, and unpredictable, Mates of State songs shift tempos and tones as they careen from pop hook to pop hook. They’re cleverly written, tough to dislodge from your mind, and a joy to listen to.

Critics have noticed. The San Francisco duo’s 2000 debut was named “one of the best albums you haven’t heard” by The New York Times. The group’s last full-length, the radiant Team Boo, earned praise in Spin, Pitchfork, and Rolling Stone, among other mainstream and alt-leaning music publications. The All-Music Guide joked that the new All Day EP was a “disappointment…. not because of the music, but because it isn’t a full-length!” For indiepop listeners, no amount of Mates of State music could ever be enough.

Prior Mates of State videos have featured the Gardner-Hammel relationship prominently: the domestic psychedelia of the “Fluke” clip from Team Boo, in which the group members sang to each other (and their cat!) across their kitchen table, was pretty representative. But neither Gardner nor Hammel appears in the video for “Goods (All In Your Head)”. Instead, directors Jonathan Yi and Sam Goetz show us a different kind of partnership: two siblings, played here by Goetz and his brother Mike (this video was actually the winner of a “Make A Mates of State Video” contest the band sponsored). At turns funny and poignant, this beautifully-shot clip follows the brothers on suburban lawns, city streets, and disused basketball courts; from tire-rolling on rainwashed pavement to wistful remembrances of a fatal bicycle accident. Despite the somber tone, it’s really a celebration of the persistence of love and brotherly camaraderie, and, like Mates of State’s music, an exhortation to speak freely from the heart.

Here at HIP we are stoked to be working with Polyvinyl Records to bring you a terrific clip from an incredible band completely worthy of your attention. The band will be on tour throughout the month of September, and we have every intention to set up as many video interviews or IDs with them as possible. Mates of State are all about getting together with regional programmers! We also have plenty of copies of the All Day EP for on-air giveways so please get in touch if this band intrigues you. If you need more info call Andy Gesner at 732-613-1779, or email info@HIPVideoPromo.com. You can also visitwww.PolyvinylRecords.com, or www.MatesofState.com to find out more about this duo poised for great things.