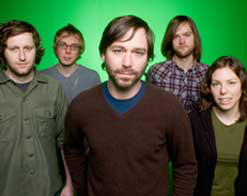 Hello to all of my esteemed friends in the video programming community! It’s Andy Gesner and the staff at HIP Video Promo, back once again with another clip from a band on the verge of a national breakthrough. It is our greatest pleasure to expose you to new talent that your viewers need to know about, and this terrific band’s time has come. You can think of Matt Pond PA as an East Coast answer to Death Cab For Cutie or The Shins (Pond and band are from Philly originally, hence the “PA”, but now live in Brooklyn): this music is poised, intelligent, artfully-constructed and often beautiful, but invariably affecting. Like DCFC, Matt Pond PA has become a favorite of The O.C., placing three of the band’s tracks, including an inspired chamber-pop cover of “Champagne Supernova” in the Fox drama.Several Arrows Later, their sixth and most accomplished album, has earned the band plaudits from the alternative and mainstream press alike; the quintet has earned four stars and a “checkmark” in theAllMusic Guide, and was followed around hipster Brooklyn by a New York Times reporter. Rolling Stone magazine called them one of the “10 Bands to Watch” for 2006.

Frontman Matt Pond sings in a slightly-hushed tenor that communicates disappointment, late-night longing and guarded optimism; when he tells a story, it’s impossible not to feel for its narrator. He’s accompanied by musicians of great sensitivity – the band’s quietly-accomplished playing adds nuance and color to his aching pop songs. On Several Arrows Later, judicious use of strings and synthesizers deepens the sweet melancholy. This is a reflective album and at times a sad one, but not a chronicle of defeat. Pond finds the steel in his distraught characters, and subtly foregrounds it. It’s no wonder that listeners so often walk away from Pond’s fevered accounts of heartbreak and loss feeling strangely invigorated.

Since the late ’05 release of Several Arrows Later, the quintet has been touring constantly, playing premiere indie rock venues with Youth Group, Dios Malos, and Cake. The gently propulsive “So Much Trouble” has become a performance standout, and it’s easy to see why: nowhere are the autumnal colors of Pond’s storytelling quite so vivid. Singing smoothly of peril and retreat, turning weather, threats, miscommunication, and regret – yet again he finds the hard core within the characterization, and draws the listener deeper into his tale.

A video for “So Much Trouble” wouldn’t be complete without falling leaves, and Pond delivers. The foliage is a flash of color in a gray universe: the band is shot in grainy, high-contrast black and white, but the leaves are animated, floating across the frames from left to right. As they fly through the spaces between the musicians, they change from bright red to Halloween orange – fading before our eyes like a passing summer. The camera follows the hands of the musicians, focusing in on strings, bows, sticks, the texture and shape of guitar headstocks. The engaging Pond sings, open-faced, but the constellation of details around him is as important as the full picture. As if to prove the point, the video ends by inviting the viewer to dive into one of the speckles that dot the grainy film. Each mark contains smaller imperfections and irregularities, which become magnified and pursued. The chase to the heart of the image is neverending; an un-solvable mystery, a haunting.

Here at HIP we are super thrilled to be working with all the musically savvy folks at New York City based Altitude Records to bring you this compelling new video. Matt Pond PA has been touring relentlessly for most of 2006 in support of Several Arrows Later, which we have plenty of copies of for all of your on-air giveaway needs. It is very important to us here at HIP that you can find time within your programming schedule to give Matt Pond PA the attention they so rightfully deserve, and though they will only be touring sporadically throughout the spring and summer, we would love to set up a video interview when the band visits your market. If you need more info, call Andy Gesner at 732-613-1779 or e-mail us atinfo@HIPVideoPromo.com . You can also visit www.AltitudeRecords.com or www.MattPondPA.com to find out more about Matt Pond PA.