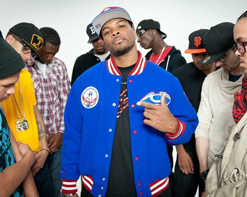 With a name like Maverik, you must command a certain presence that demands admiration and idolatry. Just like Tom Cruise’s beloved and badass Lieutenant Pete Mitchell, Maverik radiates a positive energy that flows into everything he touches. His charismatic persona, potent lyrics and dynamic delivery equal his knack for making hit records. It’s Andy Gesner and the HIP Video staff, here with a high caliber hip hop video that’s got all the right stuff, including gravity defying dance moves, shiny cars, pretty girls, and catchy-as-hell hook from the sultry singer Renee Marcou. You are welcome to stay in this urban paradise “All Night.”

Everything Maverik does stems from a genuine love of music and a passion for creativity. His polished sound is proof of it, as this songwriter holds the reigns over every aspect of production. It’s easy to tell that Maverik is an artist behind the wheel – his style is developed, his flow is effortless and clever, and his persona is ready for the big league. Maverik’s songs showcase strong emotions and incredible storytelling, which are just as important as all the blips and synths when it comes to the hip hop genre. This young MC has already opened for some of the biggest names in the music industry, including Lil Wayne, Shaggy, Beenie Man, Common, Collie Buddz, Talib Kweli, Serani, and Bobby Valentino! Maverik has also built a presence on radio stations across the country. His music has been featured in commercials, national campaign ads and on several mix-tapes. With his ever-expanding Facebook, and YouTube fan-bases as well as his popular page onJAMN945.com, Maverik is as much a social media entrepreneur as he is a stage performer.

“All Night” showcases Maverik at his sharpest, with witty lyrical referencing to boot! Somewhere in between the style of Kanye and Wayne, Maverik mixes speedy delivery with stops for hooks and vocal stretches. Knowing that mass appeal remains in the refrain, Maverik captures the pop crowd with the alluring guest vocal appearance from singer Renee Marcou. Simple and magnetic, the repetition of the harmonized line “I just wanna dance” is enough to get that booty shaking right off the bat. And if that’s just not quite convincing enough to get you on the floor, this clip has some truly acrobatic synchronized dancing from Maxim caliber girls and GQ ready boys to pop the lid right off. Call him an overachiever if you wish, but there’s even a scene that features Maverik himself jumping over someone’s head to get to a girl! The best thing about this MC though is that he’s well aware of how much fun it is to make a video like this. At a particularly memorable moment, he throws money in the air, only to have his dancers stop the clip short and rush to collect the bills.

We know you will have as much of a good time watching this video as Maverik did making it. This rapper’s mix of confidence and approachable charm will have your viewers swooning for more. We have copies of the “All Night” single available for you to check out, so be sure to let us know if you’d like some copies for your loyal fans! If you need more info, call Andy Gesner at 732-613-1779 or e-mail us at info@HIPVideoPromo.com. You can also visit www.Kutroc.com, and www.MavMusic.com to find out more about Maverik and his upcoming fall tour dates near you.