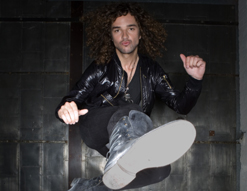 Hello! It’s Andy Gesner and the staff from HIP Video Promo with another terrific clip from a rising artist with fans on both sides of the Atlantic. Max Morgan may have been born in Liverpool, England, but his first love was American rock music. Later, he’d discover U2, Coldplay, The Klaxons, and The Verve – just in time for his move to the States. Now twenty-one years old, Morgan is making his own music, and it’s a perfect amalgam of American swagger and British style. Interrupting The Silence, his multifaceted debut album, is shaking things up on both continents; expect big things in 2009.

American TV already loves Morgan. The powerful “Loneliest Man In The World” was prominently featured on a recent episode of Private Practice; in late ’08, Gray’s Anatomy used his “Secret” to score a scene. The NFL Network licensed Morgan’s “You Better Believe” for use during the football playoffs. Last week, the telegenic singer performed an acoustic set on Fox Television’s Good Day Atlanta. He’s played to music executives at conferences in Las Vegas and to the winsome young staffers at Seventeen (check out the much-downloaded clip of his performances at the magazine’s website). He’s a face in demand, and a rare entertainer whose music can reach audiences of all ages.

“Wait For Me”, Max Morgan’s latest single, boasts a chorus as big, bold, and sweeping as any Oasis ballad. Morgan sings with absolute conviction and poise; by the time he reaches the release, he’s on fire with passion. The song is already a substantial ‘net hit: it’s been accessed more that three hundred thousand times on MySpace, and that play-count keeps rising by the hour. (Morgan has had success on MySpace before – the punchy “Sold Out To The Scene” has received close to a million plays!) AOL Music will soon be running an “About To Pop” feature about the artist and the song, and the “Wait For Me” clip will run alongside the story. The web has spoken: Max Morgan is an artist to watch.

With his long, curly hair, sharp features, and striking personal style, Morgan is a natural for the small screen. His knack for the theatrical is on display in the gorgeously-shot “Wait For Me” clip. Here, he wanders the corridors of a pre-war movie palace, stopping to sing under the archways and chandeliers. A young woman haunts the halls, too; she’s present in the back of many shots, shadowed in a doorway, or at the foot of the grand staircases. She lingers like a memory of something that’s been lost – she’s impassive, cool, beautiful, impossible to reach. Max Morgan, on the other hand, approaches the camera, walking slowly toward it as if he’s pleading with the lens. Later, he takes the stage at the movie palace; with his band behind him, surrounded by grandeur, he sends his aching song to the rafters above.

We pleased to be given the opportunity to work with Jimmy Brunetti and the staff at Croshal Entertainment Group to bring you the new Max Morgan “Wait For Me” clip. If you need more info, call Andy Gesner at 732-613-1779 or e-mail us at info@HIPVideoPromo.com. You can also visit www.CroshalGroup.com or www.MaxMorgan.com to find out more about Max Morgan.