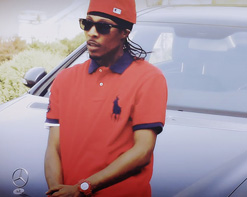 What’s the first thing on your mind when you get up in the morning? For Maryland rapper Max Pain it’s making the green stuff appear through the grapevine of hard hustling. Programmers, it’s Andy Gesner and the HIP Crew, here with a rapper who’s work ethic matches his rhyme. Max Pain is ready to inflict some serious damage with his latest stunner “Off To The Money.”

Sometimes tradition can spawn an unpredicted muse. When Marcus “Max Pain” Branch sat in church and listened to his mother sing in the choir, love for the sound of voices and instruments grew into what has now become a highly-visible career in rap music. Pain has, since then, spent countless hours in the studio pumping out track after track under his moniker and for several other notable names, gaining admission into the Platoon records roster. The catalog flows with tracks such as “Stuntin” featuring former No Limit artist/producer Fiend; “Stop Schemin” (Remix) featuring infamous New Jersey femcee Lady Luck; Pain also wrote lyrics, rapped, and co-produced the mix tape The Stimulus Package along with DJ Dutty Laundry. His music has been on display around the country, performing on stages along with major acts such as Busta Rhymes, Young Jeezy, Trina, Young Buck and YoungBloodz. The young rapper has also been featured on popular genre websites like Coast2Coast Magazine,StarForceHipHop, RapHDTV, and DMV Life.

“Off To The Money” is a hustler anthem from start to finish. The track deals with the hardship of hitting the ground running at 5:30am daily. While some folks are still sleeping, this rapper is working his chops to afford a lifestyle that others complain about not having. Living upscale, riding around in a Benz, and having it all comes at the cost of time and sleep, and we all have to hustle to make it happen. The clip features our tireless protagonist taking on the world in full force, something that many will be able to relate to and become inspired by. Max Pain’s flow is aggressive and assertive, like his intentions and fit in with the track’s ambitious production. It’s also important to point out that Pain doesn’t waste his time with cheesy club clichés and embraces old school hip hop culture, making him a stand out contender in the genre’s often wimpy watered down scene.

We are thrilled to bring you this upbeat hip hop track recorded with honest sweat and tears of a producer/rapper who knows that good things come to those work for them. We’ve got some Max Pain stuff here at HIP HQ and would love to hook you up with his swag. Let us know if you’re interested in any contests or giveaways, and if you’d like to interview Max Pain for your show. If you need more info, call Andy Gesner at 732-613-1779 or e-mail us at info@HIPVideoPromo.com.