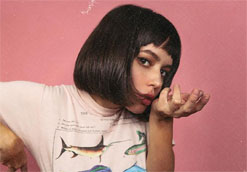 This July, Meg Myers released her new album Take Me To The Disco on 300 Entertainment to critical acclaim: The New York Times noted it was “Seeing and then exploding”, Billboard called it “Cathartic… life-affirming”, and Uproxx said it was “as powerful as it is unsettling.” She teamed up with producer Christian “Leggy” Landon to co-write most of the songs, and also brought in drummer Victor Indrizzo (who’s played with Depeche Mode) and a live string section, The Section Quartet. Her “tremendously powerful voice” (Rolling Stone) shines as it did on Sorry, and this time, she bares her soul with an intensity only she can convey.

The album’s lead single “Numb” is a haunting look at the pressures of the music business and life in general. “‘Feeling numb’ relates to the many pressures of life and our reactions to this weight,” Meg explains. “When this burden becomes too much and we can no longer run…we essentially numb out.” Billboard noted that the “piano and electronics gnaw at the alt-rock arrangement” in this powerful track that’s “a weapon against the modern-day frustrations inherent in life and music.” Meg paired with director Clara Aranovich for the video, who brought a new, deeper meaning to the story. “When I first wrote ‘Numb…it was about my experience with a major record label. But as I dug deeper, I found that it goes back to some early childhood stuff and how shutting down, or escaping, felt like the safer thing to do,” she says. It’s something that’s begun to make a huge impact: the song is currently Top 30 at alternative radio and has over 3.5 million Spotify streams.

We’re honored to be working with Meg Myers to share the powerful video for “Numb.” It is our hope that you embrace this clip and add it to your regular programming and online presentations. Meg Myers will be going on tour this fall; head to megmyers.com to see the full list of dates. Rest assured we’ll have plenty of Meg Myers merch available for on-air contests and giveaways so don’t hesitate to get in touch. For more information on Meg Myers please contact Andy Gesner and the HIP Video Promo team at (732)-613-1779 or email us at info@HIPVideoPromo.com. You can also check out www.facebook.com/megmyersofficial or www.twitter.com/megmyers for the latest updates.