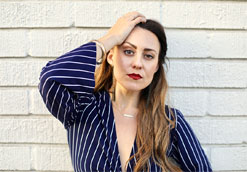 Melanie Taylor is a Los Angeles based singer-songwriter whose time has come to leap off the page into the limelight. This distinguished alt-pop performer mixes electro-pop elements into her 90s influenced style, creating a world of her own. Gaining inspiration from the late and great Michael Jackson, she’s living proof that the best thing you can ever be in life, is yourself. Her unique approach to songwriting opens a portal of authenticity that listeners gravitate towards through her intoxicating ideas.

Melanie Taylor’s roots are grounded in San Diego, CA. She was an only child raised by a single working mother, which meant a lot of daycare and time left to entertain herself. Melanie found solace in classic pop records like Mariah Carey and Alanis Morissette, which guided her in the right direction by giving her a vision of her untapped potential. Childhood was lonely at times, but once she was introduced to theater, she found belonging in her theater families. Even now, she treats her audience like brothers and sisters, morphing the stage into her true home. She strives to consistently break out of her shell, opening herself up to vulnerability by allowing self-reflection and acceptance. Melanie began her artist development in 2012 with her debut record All About Today, which was later followed by her self-titled album in 2016. She most recently put her pen back onto paper with her 2018 singles “Ink” and “Adderall,” as she comes to terms with a need for commitment (in “Ink”) and a need for release (in “Adderall”).

Melanie Taylor graces the streets of Hollywood in her official music video for “Adderall.” Quickly transitioning to contrasting shots of her draped in white, her internal discourse becomes overbearing, influencing her erratic actions. With a bare face, her pure raw energy creeps to the surface which was once internally manifested. Screaming up to God, she begs for answers that come in the form of an interpretive dance. As she watches from the back of an empty theater, the isolation becomes all-encompassing. Melanie hits her own personal rock bottom and breaks her cycle of self-destruction by becoming aware of the hurtful relationship she’s in, ultimately putting an end to the abuse she’s endured, the drug leaving it’s addict.

Here at HIP Video Promo we’re thrilled to be working with Melanie Taylor, and we hope you embrace this newly minted clip for “Adderall” as much as we have. We’d love to see this video added to your cherished programming and online presentations in a timely fashion, so please don’t hesitate to check it out! Rest assured we’ll have plenty of Melanie Taylor merch available for on-air contests and giveaways, so if you’d like to get your hands on some, we’re here for you. For more information on Melanie Taylor please contact Andy Gesner and the HIP Video Promo team at (732)-613-1779 or email us at info@HIPVideoPromo.com. You can also check out instagram.com/melanietaylormusic and facebook.com/MelanieTaylorMusic for recent updates on Melanie Taylor, and visit melanietaylorofficial.com for more on this artist that’s impossible not to root for.