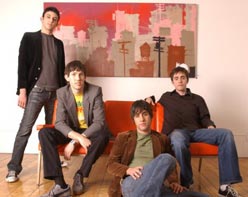 Greetings to all my programming friends from coast to coast and I hope you have had a great summer so far. It’s Andy Gesner and the staff from HIP Video Promo continuing to supply you with the best music vids of 2004! Today, it’s my pleasure to introduce you to Melee, a melodic rock quartet from Southern California with a radio-ready sound and a refreshingly open-minded approach to pop arrangements. The young foursome never skimps on the big guitar moments – but they add shading and commentary from piano, buzzing synthesizer, gorgeous strings, woodwinds, alternately shouted and purred backing vocals, and skittering auxiliary percussion. Chris Cron has mesmerizing power in his earth-shaking pipes; certainly he sings out, but he almost never screams. Even at his most strenuous, he hits all of his notes, fully and surely. This is a relentlessly musical band: tuneful, harmonically sophisticated, and accomplished.

Everyday Behavior, Melee’s new CD out on Sub City, begins with the furious rock stomp of “Got It All”. But by the time the album reaches its bracing middle stretch, the group shows its true essence: up-tempo piano rock (“The Curse”, “Sleeping Through Autumn”, “Perfect Mess”) that sound like Elton John after a bionic infusion of strength and speed. Lead single “The War” splits the difference – the guitars bite and snarl, the drums pound, and the chorus reaches for the indie rock stratosphere, but a plaintive piano underpins the bridge and outro, and adds its melancholy resonance to the track. But on the first pass, you may hardly notice – chances are, you’ll be too entranced by Cron’s soaring, acrobatic lead vocal to pay attention to anything else.

The word “melee” means hand-to-hand combat, and the name of “The War” suggests the foursome has adopted a pugnacious identity. But who are they fighting with? In Cron’s narratives, his enemy is, more often than not, himself; and “The War” concerns itself more with emotional states than territorial ones. That’s not to deny that there is, in a climate like this one, a real political dimension to passages like “your war is won/my friend you’re finally done/on that day you’ll find ambitions don’t lie here anymore.” But Cron’s heart is with the passionately-sung follow up line: “The one you love has gone/and settled the score.”

The terrific new video for “The War” is indeed a literalization of the title – but one with a spin. Directors Patrick Jensen & Brendan Malloy show us a war, all right; but there are no guns or bullets here. Instead, the “war” dramatized in the video is a traditional water balloon fight between two gangs of neighborhood kids. Faces painted and dressed in homemade uniforms, and armed with slings, buckets, and trash-can lids, they hurl their bombs at each other with the wild fury of any front-line fighter. As the martial drumbeat rings out from the hard aluminum of overturned pails, we watch the unexpurgated emotion of the young combatants: some charging maniacally, some methodically loading their wet weapons, some cowering beneath shelter. Jensen and Malloy shoot the battle through an oval-shaped filter that makes the scene look like a Viewmaster or a home movie. Water splashes across the screen, and beads up on the lens – it’s cinema-verite, combat-zone photography in a quiet suburban park.

Meanwhile, the band surveys the scene from the scrub-brushed top of a typical Southern California hill. Set up beneath radio towers, they hurl the song down at the red rooftops of the sleepy town. Chris Cron throws his body between his guitar players, singing with a controlled abandon.

Everyday Behavior is the latest release from Sub City Records, a public-minded label that contributes 5% of all album sales to area charities. Melee has chosen to make their stand on behalf of Orangewood PALS, a nonprofit dedicated to fighting child neglect and abuse in Orange County, California. It is a true honor to get to work with Melee along with Jake and Ana at Hopeless/Sub City Records. It’s very exciting for us to be a part of their musical parade. Here at HIP we feel a true sense of camaraderie with all the small labels we champion, but these folks are truly special. We can assure you that all of your Melee needs will be met in a timely fashion and that Sub City fully recognizes how important regional video is to breaking a new band! Melee will be touring throughout the rest of 2004 and are stoked to do interviews in every market and make sure you get your cherished video IDs.

HIP Video Promo and Sub City are also proud to announce the “Win the War” contest where every programmer that adds the new video from Melee in August or September will be entered in a drawing to win a killer prize package of Melee goodies, including autographed CDs, posters and an awesome Melee T shirt. But the best part of the “Win the War” contest is that the grand prize winner will get to select for themselves ten of their favorite Hopeless/Sub City releases. Lots of fantastic music here, including Thrice and Avenged Sevenfold! If you need more info, call Andy Gesner at (732) 613-1779, or email info@HIPVideoPromo.com. You can also visit Sub City to find out more about Sub City’s latest buzz band.