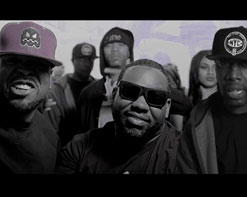 Method Man has been on a tear since the release of his new album The Meth Lab earlier this year via Tommy Boy Entertainment. His first two singles for “The Meth Lab” and “Straight Gutta” have shown that he hasn’t lost a step in his many years on the hip hop playing field. In his many years both as a Wu-Tang member and solo artist he has put together quite a list a of famous friends that appear on The Meth Lab. So far we’ve seen appearances by Hanz On, Streetlife and Redman, but for his newest single “The Purple Tape,” he has upped the ante even further by teaming up with fellow Wu-Tang alumni Raekwon and Inspectah Deck!

In 1995 Raekwon released Only Built 4 Cuban Linx, which was a definitive release of the era complete with purple cassette tape packaging. Coupling that with the fact that Method Man named his own son after Raekwon it was inevitable that the two would collaborate on this track. When it’s all said and done, the collaboration brings together Method Man, both Raekwons, and Inspectah Deck as they “glide and slide all over the studio with their crew banging along to the J57-produced record.” – UPROXX

For the video, it’s more about the concept and execution than the narrative. From a treatment perspective it’s not much more than the entire crew enjoying each other’s vibes and taking turns dropping their respective lines and verses for the camera. The kinship is deep and obvious between the entire crew. The tactic that shines through is director The Last American Bboy’s slick coloring. With the exception of one color retaining its saturation, the entire video is black and white. Having the single color remain even influences the black and white, casting a similar hue across the whole video. It’s a subtle trick, but a very rewarding one at that. What’s the color you ask? Purple, of course.

We’re once again thrilled to be working with the good folks at Tommy Boy Entertainment, LLC to keep bringing you the good stuff! If you’d like more info, please contact Andy Gesner and the HIP Video Promo crew at (732)-613-1779, or email us at info@HIPVideoPromo.com for more info. You can also visit www.TommyBoy.com/.