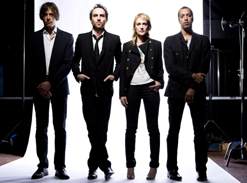 Hello programmers everywhere! It’s Andy Gesner and the staff from HIP Video Promo and today we’re thrilled to be bringing you the latest clip from one of the world’s most respected – and most exciting – rock bands. Metric has never chased stardom for its own sake: they’ve always followed their own impulses and taken brave and fascinating sonic detours. They’ve been unafraid to experiment and to challenge listeners; frontwoman Emily Haines has never hesitated to write an acerbic, politically-charged lyric. They’re originals, and four albums into their career, they remain uncompromised: heralded by critics, admired by their peers, and adored by their fans. If international recognition has come calling anyway (and it has), all credit is due to their terrific songs, their sensational stage show, and their staggering musicianship.

Now comes “Gimme Sympathy” – the blockbuster we always knew they’d write. From the propulsive guitars to the dizzy and oscillating synthesizers to the frantic hi-hat to Haines’s undeniable performance, everything about the track promises to launch Metric into the stratosphere. The Toronto quartet has penned an early contender for the song of the spring: a record as edgy and cool as MGMT and as radio-ready as The Shins’ latest. We’ll say it right now: if “Gimme Sympathy” doesn’t become a massive hit, mainstream American success isn’t worth chasing.

North of the border, of course, they’re already rock stars. Old World Underground, Where Are You Now?, the album that introduced the Metric sound and stance to thousands, earned the band a platinum disc in Canada and a nomination for the Polaris prize. Live It Out, the follow-up, spawned three underground hit singles and intriguing videos – including the ferociously sexy clip for “Poster Of A Girl”, before also going platinum. Knives Don’t Have Your Back, Haines’s quietly-stunning solo disc cemented her reputation as a risky, incisive, and sophisticated writer; the harrowing promo clip for “Doctor Blind” was named one of the best videos of 2006 by Pitchfork.

In the “Doctor Blind” clip, Haines finds herself stranded in an abandoned discount pharmacy; around her, the bodies of ordinary shoppers fall to the floor like dominoes. As anybody who has seen Metric in performance can tell you, Haines is a born performer, and she’s as captivating on camera as she is when she’s dancing onstage. In the “Gimme Sympathy” clip, we see her first in a club dressing room; she’s singing to herself, poised and ready for the show. As she strides down the staircase to the performance area, the lights are already up, and the band is in action – but there’s nobody else in the room. What happens next defies all logical explanation, so we’re not going to try, but in our amazement we can describe it: during one continuous shot, the bandmembers change places and instruments several times. First we see Haines on the microphone; seconds later, she’s wearing different clothing and playing the drums as guitarist James Shaw sings in her place. The camera keeps circling the band, and the musicians keep trading places (and outfits). It’s worth repeating that at no point is the footage cut – the “Gimme Sympathy” clip is one long shot, albeit one that should be impossible to film. Color us as amazed as the wing-wearing children who stream through the concert hall during the last chorus, bust open the doors, and let the daylight in.

It is a tremendous pleasure to be working with the team at Metric’s own, newly founded label (MMI – self-releasing their record around the globe) to bring you the fantastic “Gimme Sympathy” video. Get in touch for your copy of Fantasies for all your on-air giveaways and contests! If you need more info, call Andy Gesner at 732-613-1779 or e-mail us at info@HIPVideoPromo.com. You can also visit www.ILoveMetric.com to find out more about Metric.