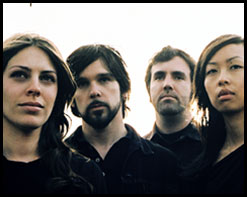 Greetings fellow music video stalwarts! It’s Andy Gesner and the staff from HIP Video Promo back with another gripping video that is sure to please. When you think about midnight movies, what’s the first thing that comes to mind? A flick that’s dark, subversive, anti-establishment, forbidden; Rocky Horror, or Heavy Metal, or maybe something by Warhol. Those who were young in the Seventies and early Eighties remember sneaking off to see midnight movies – fibbing and making excuses to parents, and joining friends under the cinema lights to watch something frightening, or erotic, or provocative, or in any case far from generally-approved entertainment. That’s the spirit in which we suggest you hear the band Midnight Movies, a trippy, neopsychedelic quartet from Los Angeles. While their music isn’t ever remote or difficult to access, there’s a decadent and art-damaged quality to everything they do: as a direction, here’s a band capable of a remarkably faithful cover of Syd Barrett’s “Golden Hair”. The group whispers secrets, cajoles and coerces, and envelops listeners in a seductive blanket of sound.

Appropriately, the group has recently signed with New Line Records – the indie label offshoot of New Line Cinema. A full CD titled Lion The Girl (a follow-up to their drugged and dreamy 2004 debut) is in the works; in the meantime, the band has made a single teaser available for download on iTunes. “Patient Eye” is both an evolution and a refinement of the sound on Midnight Movies: fuzzed-out, languorous, cinematic, Spacemen 3-supple and Luna-lush. It’s an elusive track – just when it seems to have settled into an acid-drenched groove, it slips into an indelible pop chorus. Frontwoman Gena Olivier’s vocals glide over the guitars and synthesizers; she simultaneously communicates late-night desperation and icy, dispassionate remove.

The first Midnight Movies album made the band heroes in the super-hip Silverlake neighborhood, and their live show established them as a genuine threat to repeat that success nationwide. The quartet has shared stages with like-minded bands such as Broadcast, Clinic, and Stereolab, and they’ve recently completed a short tour with Serena Maneesh. Recorded at the legendary Robert Lang Studios in Seattle – a complex literally hewn out of the seaside rock – the upcoming Lion The Girl promises more creative juxtapositions, more dazzling melodies, and more bold adventures into the ether.

Corey Petrick, the director behind Dot And Cross Productions, has worked with Midnight Movies before: he shot the strange, spectral performance clip for “Persimmon Tree”, the lead single from the debut album. In it, he captured the group in an abandoned factory, walking through the halls without looking at each other, and performing at night in the courtyard of a desolate warehouse. The “Patient Eye” clip is trippier still – it opens with a long shot of traveler on a deserted foot-path through hilly countryside. Petrick then finds Olivier, leaning back on a leather sofa, still as a consumptive in her last moments. Her face occupies most of his frame, and a girl’s fingers caress her cheek lovingly as she sings. When the lens pulls back to reveal the darkened room, the weirdness intensifies – there’s a candelabra in the distance, three well-dressed figures seated around a table in the background, and the girl-attendant looks sickly and drawn herself. Olivier’s precise enunciation only deepens the sense of decadence and decay. From time to time, the camera cuts away from the singer’s face, and follows the lantern-lit journey of the traveler. The clip closes with the outline of his lips, pressed against her temple.

Kevin Kertes and the good folks from New Line Records always help put some of the hottest new musical talent on the map, and we’re thrilled to have the opportunity to work together again to bring you the new Midnight Movies “Patient Eye” video. We have lots of copies of the “Patient Eye” CD single on hand for all of your on-air giveaway needs. If you need more info, call Andy Gesner at 732-613-1779 or e-mail us at info@HIPVideoPromo.com. You can also visit www.NewLineRecords.com  to find out more about Midnight Movies.