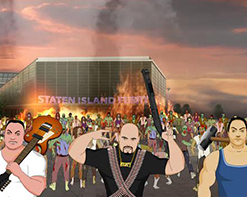 The idea that a Zombie apocalypse could actually occur in the modern world sometime in our near future is a contemporary theme throughout today’s culture, and Mighty Matt Saladino proves how this fantastic trend continues to inspire new and creative ways to view the end of the world.

With the help of AMC’s popular television series The Walking Dead, society has become enthralled with the thought of a possible zombie apocalypse. Mighty Matt Saladino; however, puts a lighthearted spin on this sometimes-serious genre. Two versions of the tune exist: “Zombie Killer NYC” (Original Mix) and “Zombie Killer NYC” (Electric Club Remix). Both musical versions are unique unto themselves to say the least, but it is by far the outlandishly creative and entertaining music video which is written, produced, arranged, directed and even performed in animated character by Mighty Matt Saladino himself, that sets this animated music video far above the rest.

As a marketing test, “Zombie Killer NYC” was initially released to over 200,000 DJs nationwide by Starfleet Digital Music Pool and on November 1st 2013, “Zombie Killer NYC” out-performed the likes of Flo-Rida/Pitbull, Rihanna, Katy Perry, Lady Gaga and Britney Spears to capture the #1 position on both the Dance and Crossover music charts. This is unheard of by any new artist. Please visit Starfleet’s website at Starfleetmusic.com and check out the music charts for October, November and December 2013. Also, in the scrolling VIP “Featured Artist” section on the home page, please click on “Zombie Killer NYC” to read the rave reviews from the DJs as well as the amazing voting results.

And now, HIP Video Promo is proud to spearhead the official release of this hit animated music video to the world!

The theme of this over-the-top animated music video is centered on flesh eating zombies in New York City. “Zombie Killer NYC” brings this phenomenon to life in contemporary and humorous ways. References to pop culture and NYC landmarks bring the song to life and capture wit and comedy in ways like no one has ever done before. At the start of the video, viewers are introduced to a movie theater filled with eager zombie movie fans. Mighty Matt Saladino and two fellow musicians are front and center as they lead us right into the zombie apocalypse! Will they escape? Or will they be torn limb from limb by a flesh-eating horde of undead? Is there a surprise ending? Tune in to find out!

Thanks to the incredible vision of Mighty Matt Saladino, his unique song and the creative story line and animation of “Zombie Killer NYC” is a winning combination which will undoubtedly become a recurring Halloween hit for many years to come, even after the current “zombie craze” is finally dead and buried. And as long as hit shows like The Walking Dead continue to keep the dead alive, so to speak, “Zombie Killer NYC” will continue to have a very live and supportive audience.

Please be sure to check out both versions of this creative clip and please let us know if you need anything else from our end. For more information on this exciting new artist, please contact Andy Gesner and the HIP Video Promo staff at (732)-613-1779 or email us at info@HIPVideoPromo.com.