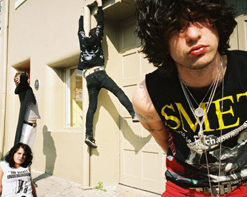 A big rockin’ hello to all my music video programming friends! It’s Andy Gesner and the staff from HIP Video Promo with another video from a band whose live performance is sure to knock your socks off! Not many were hip to Bona Roba – that stylish, raucous rock combo that dazzled audiences in the Manhattan club scene during the first part of this decade. But Bona Roba’s excellence was no secret on the New York City streets, and local audiences made photogenic frontman Neal Carlson a Downtown superstar. Since the dissolution of Bona Roba, Carlson has put together a new band, calling on four friends from Down Under. Together, they form Mink, and they’re poised to teach America (and Australia, for that matter) what New Yorkers already know: that Carlson is an exciting singer, performer, and songwriter, and one who only runs in the best of company.

We’ll have to wait until July for a full-length. But the songs that have emerged from the Mink camp so far are enough to excite anybody with a taste for legit New York rock and roll. Carlson leads the band through a characteristically Manhattanite repertoire: “Dematerialize”, a sardonic, Lou Reed-like blues rocker, the decadent, trash-poppy “Crazy World”, and the distorted, gritty “Pressure Pressure”. And then there’s “Talk To Me”. The quartet’s lead single sounds to our ears like an irresistible springtime hit: a brash come-on with a singalong chorus and energy to burn. Over Stella Mozgawa’s propulsive shuffle beat, guitarists David Lowy and Nick Maybury slash and stutter, and Carlson shakes off his nerves and sings out a solicitation to the gorgeous girl across the room.

“Talk To Me” is just one of several Mink tracks produced by the visionary Sylvia Massy (Red Hot Chili Peppers, System Of A Down). Massy has preserved the group’s live intensity, and polished the band just enough; commercial radio stations, teased by the sound, have already raced to add the song. “Pressure Pressure”, produced by grammy winner Chris Shaw and remixed by Massy, found a receptive audience at ESPN – the sports network used the track in its promotional spots for the ’06 MLB playoffs. This winter, Mink wowed audiences at no fewer than four SXSW showcases, and will hit the road this month for three weeks with Saliva before joining up with none other than the legendary KISS for a string of shows!

In any hemisphere, Mink exudes personality. Video director Christian Lamb – who has also worked with Madonna and Incubus – captures the boisterous character of the band in his delirious clip for “Talk To Me”. He imagines the group as the guests on a Japanese chat show, complete with dancing girls, a middle-aged toupee-wearing star, and a giant mascot dressed as a cellular phone. Still shots flip by, neon-colored and adorned with Japanese writing; the frames move as if they’re individual images captured on a ViewMaster slide. The group performs, and even tries their hand on an Iron Chef-style cooking show; they approach their host, his cast-members, and their studio audience with bemusement. But the five musicians in Mink are every bit as colorful as their surroundings. Neal Carlson and his mates know how to inhabit a live-action cartoon – Maybury takes a lead on a guitar shaped like Japanese anime character Doraemon – and they fill every shot with exuberance and NYC sizzle.

Here at HIP, we’re lighting up with excitement about teaming up with Mori Ninomiya and all the savvy and adventurous music lovers at Takeout Marketing to bring you this standout new video. There’s lots of anticipation for Mink’s new record, so be a trendsetter and support this band while they’re still “under the radar!” If you need more info, call Andy Gesner at 732-613-1779 or e-mail us at info@HIPVideoPromo.com. You can also visit www.MinkMusic.com to find out more about Mink.