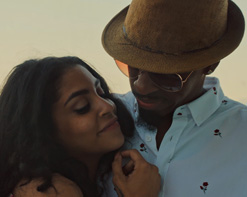 It’s a common thing for artists to drift outside the sphere of their specific trade to round out other talents and pursue other interests. Coming this October, Mista Roe will be appearing in a new AMC television series called Fifth Ward as an actor and his music will also be featured in multiple episodes. Fifth Ward captures the everyday problems that plague inner city communities, focusing on the historic black neighborhood of Fifth Ward in Houston, Texas. Created by award winning writer, producer, and director Greg Carter and produced by Dominique Telson, this show will revolve around a a family with deep roots in the town’s history, dealing with relevant social, economic, and political issues as seen throughout the three generations of the family. The show is being filmed on location, and will premiere in October of 2017.

With a newly signed contract with a major television network and a brand new single freshly released, Mista Roe is at the top of his game. “Break You Off” is the third single we’ve been lucky to promote for this young Louisianan, and his rhythmic style is unwavering. Set at the beach with his boo, this video shows a classic love story masterfully combined with artful cinematography and detail, the product of director Huey Rawls with So Nervy Films. Always a romantic, Mista Roe knows how to charm his audience.

It’s a privilege and honor to be working with Mista Roe yet again as he grows further in his career. Please let us know what we can do to get this budding star into your programming! For more information on this compelling songsmith, please contact Andy Gesner and the HIP Video Promo staff at (732) 613 1779 or email us at info@HIPVideoPromo.com.

For info about other Mista Roe music videos, click HERE