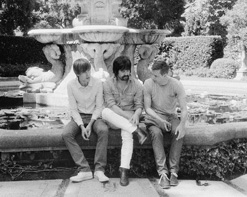 The HIP Video promo staff and Andy Gesner are excited to be presenting a new video from a charming band that generates a certain creative musical complexity—Mister Heavenly. Composed of three extremely talented musicians, their music defines all elements of rock that is playful and wonderfully orchestrated, yet monumental. Steering away from the idea of being labeled as just another indie-rock band, Mister Heavenly exemplifies a positive state of mind, which staggeringly encourages some destruction, but all of the more…creation.

The band consists of Nick Thorburn of Islands and The Unicorns, Ryan Kattner from Man Man, and Joe Plummer of the infamous Modest Mouse. In 2007, Man Man had toured with Modest Mouse, where a strong bond of musical and friendly admiration took place. Their musical differences are apparent within their music, and it is obvious that they hold this bond at a high level of appreciation. There’s a complete balance between an energetic style of rock, which, when combined with orchestrated string elements, takes hold of your eardrums. Easy to influence and hard to ignore, Mister Heavenly presents you with the obscure, which all of the while adheres to the importance of human differences.

In the new video for “Bronx Sniper” from their album Out of Love, you are strictly captivated towards tiny hints of a new-age version of Michael Jackson’s “Thriller.” Although there are no scary zombies, the video holds a valuable message, which completes this earthy idea of contentedness. You are struck by the cold and angry vibe you receive from a father figure in the beginning of the video, which is carried out and ultimately defeated by the imagination of a child. It is playful, inspirational, and encourages us to remain forever young. “Bronx Sniper” holds the key to the amazing belief in the mere existence of human beings. The song itself is incredible and upbeat, and the instruments allow it to be a perfect soundtrack to every day life.

We are faced with a great amount of casualties within the music scene, but when you have a strong collaboration of musically inclined individuals, you are confronted with an iconic band that will forever mesmerize and entertain. If you need more info, call Andy Gesner at 732-613-1779 or e-mail us at info@HIPVideoPromo.com. You can also visit www.SubPop.com orwww.MisterHeavenly.com to find out more about Mister Heavenly and any upcoming tour dates near you.