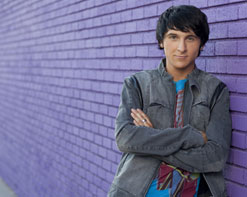 Hello cherished programmers! Don’t let the moody winter season get a hold of you just yet! We’ve got a star coming your way that’s visible in any weather, day and night. Of course, we are referring to Disney Star Mitchel Musso and his new music video for “Celebrate” from his sophomore album, Brainstorm (available now at Walmart).

Mitchel Musso is no stranger when it comes to the spotlight. In fact, he is world famous for his major acting role on one of the biggest shows on television over the last several years, “Hannah Montana!” Besides starring alongside superstar Miley Cyrus, Mitchel Musso also voices a character on the hit Disney Channel animated series “Phineas and Ferb,” alongside actress Ashley Tisdale. Musso has also voiced a character on “King of the Hill” and starred in the blockbuster movie “Monster House.” And for all of you Chuck Norris fans out there, Musso appeared in the TV movie Walker, Texas Ranger: Trial By Fire. Mitchel Musso can currently be seen as the star of Disney’s newest hit series, “Pair of Kings.”

This multifaceted young man has also seen a fair share of musical exposure with the help of Radio Disney’s popular compilation CD’s;Radio Disney Jams Vol. 11 and Vol. 12. Mitchel has also been touring the country supporting his debut self-titled album over the past year, sharing the stage with Miley Cyrus, Selena Gomes, and Metro Station, as well as a successful headlining tour. Mitchel’s first single “Hey” off the album shot to #8 on the iTunes Pop chart and to date, over 225,000 digital singles have been downloaded. “Hey” was one of his seven singles to hit the Top 10 on Radio Disney’s Top 30 chart. To-date, Mitchel has sold over 450,000 digital downloads off his debut album and he currently has over 3,000,000 song plays on MySpace.

Mitchel’s sophomore CD, Brainstorm is available now exclusively at Walmart stores nationwide. Currently, he is promoting his new release, headlining concerts across the US and Canada as he hits the ground running with his latest dance pop song “Celebrate.” This radio-ready entry will have any fan of the genre raising their hands and shaking their hips. The video comes packaged in LA’s Hollywood style, taking place at every teenager’s dream house pool party. Mitchel Musso is the center of attention as he delivers the journal back to the girl of his dreams. You definitely need to watch all of the music videos from Brainstorm in order to follow the story!

We are thrilled to be working with an artist who’s on the verge of a major mainstream breakthrough and hope you will jump onboard to skyrocket this release into the stratosphere. We’ve got tons of Mitchel Musso gear and swag here at the office for all your giveaway needs. If you need more info, call Andy Gesner at 732-613-1779 or e-mail us at info@HIPVideoPromo.com. You can also visit www.Mitchel-Musso.com to find out more about Mitchel Musso.