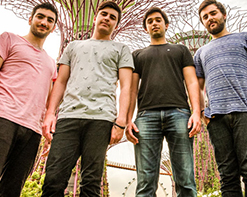 With hauntingly bounded lyrics and an innovative thematic display that makes them diverse from other bands, Australia’s Monks of Mellonwah creates an orchestrated masterpiece with their new video “Ghost Stories.” Last year we brought you their captivating clip for “Neverending Spirit” and all of us here at HIP Video Promo are pleased to once again be working with this stellar group and introduce the mesmerizing tale.

The award winning four-piece from Sydney, Australia has toured nationally and internationally, travelling to the United States twice, and winning awards for Best International Act from the LA Music Awards and Best Indie Rock Band at the AIM Awards. With a sound that blends psychedelic and alternative rock, Monks of Mellonwah manages to create feelings of film inspired music. Their three EPs and successive music videos have gained them worldwide critical acclaim, airplay on MTV and extensive radio play.

Media attention earned the band licensing spots and syncs through a number of production companies in the US and Germany, including Discovery Networks and Bunim Murray. Since the highly successful release of their experimental trilogy Sky And The Dark Night almost one year ago, Monks recently released their debut album Turn The People. The album is a thirteen-track collection that is distinctive and masterfully sharp, covering a blend of characteristics unique to the band.

“Ghost Stories,” is a hauntingly produced piece. A unique mixture of influences that invoke thoughts of everything from Radiohead to Red Hot Chili Peppers, the song catches your attention, and the video clip adds more to your captivity. Director Bruno Kataoka takes us deep into the confines of the human mind with prolific cinematic creativity; lead vocalist Vikram Kaushik effortlessly sings and tackles the art of being quietly introspective. “Ghost Stories” follows the enigmatic cruelties of a young man suffering from insane thoughts. As viewers, we become the protagonist and suffer these same cruelties.

With a recently completed tour of the East coast of Australia and live performances at Music Matters in Singapore, Monks of Mellonwah are constantly establishing themselves as one of the hardest working and most deserving artists out there today. We can’t encourage you enough to support this video! For your latest information please contact Andy Gesner and the HIP Video Promo staff at (732) 613-1779 or email us at info@HIPVideoPromo.com . You can also visit www.MonksOfMellonwah.com/ for more info.