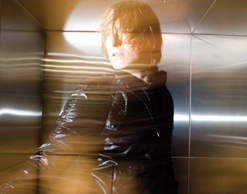 MONSTER IN THE MACHINE

A big warm hello to all my video programming friends! It’s Andy Gesner and the staff from HIP Video Promo, here with a brand new clip from a visionary musician with a fascinating backstory. One thing we’ve learned over the years is that talent is protean: a superior songwriter will, very often, also be a superior writer, or sculptor, or dancer, or athlete. Shannon Crawford of Monster In The Machine is highly-regarded among art cognoscenti as a painter – his dark and occasionally surreal canvases hang in the homes of movie stars, storytellers, and L.A. dreamers alike. Crawford painted the provocative covers of Norma Jean’s Redeemer and Steal This Albumby Suicide Machines. But Crawford has always written and recorded songs, too, and released several critically-acclaimed albums with Cellophane. He’s rocked Ozzfest and toured across America. And when he played his recent demos for long-time friend James “Munky” Shaffer, the KoRn guitarist became so inspired that he resurrected plans to start his own label. Emotional Syphon Records is the indie upstart, and Butterfly Pinned is its debut release.

While Butterfly Pinned undoubtedly rocks, Monster In The Machine sounds nothing like their patron’s band. Instead, it’s a cleverly-assembled hybrid of metal, grunge, blues, electronic music, and classic pop, indebted to Ziggy-era Bowie, Butch Vig, and the meanest streets of Hollywood and Santa Monica. Fans of Cellophane (and that group’s cult following has only grown since their breakup) will find much that is familiar in the MITM sound. This is, however, inarguably the most realized music Shannon Crawford has ever made; it’s articulate cultural commentary wedded to scalding riffs and skittering beats. Jo-Anne Greene of the All-Music Guide recently gave the set a four-and-a-half star rave, praising its “thoughtful lyrics, strong melodies, infectious choruses, and sheer creativity.

Crawford’s paintings don’t shy away from controversy, so it’s no surprise that his words are trenchant and cutting, too – organized religion, political corruption, social dissolution, environmental breakdown, and human cruelty all come under his microscope. He’s had some high-profile help: sure-handed drummer Josh Freese (Nine Inch Nails, G’n’R, A Perfect Circle, scores of other bands) keeps the backbeat, and old Cellophane compatriot Doug Ardito (also of Puddle Of Mudd) handles the bass. Imani Coppola contributes violin to the soaring “Shut The Door”, and Shaffer himself sits in on album closer “Don’t”.

A live iteration of Monster In The Machine has hit the road and will be touring in support of Butterfly Pinned for most of the balance of ’07. They’ve already shared bills with Riders On The Storm – the post-Doors band featuring Robbie Krieger and Ray Manzarek. It’s an intriguing pairing, because there’s much about Shannon Crawford that’s reminiscent of Jim Morrison: in concert, he radiates a similar intelligence, diabolical intensity and dark command. In “Savior”, a focal point of the MITM live set as well as a highlight of Butterfly Pinned, Crawford snarls at illegitimate authority, and excoriates troublemakers who hide behind the façade of spiritual righteousness. The clip for “Savior” focuses on the Monster In The Machine frontman, who plays guitar and sings in front of a bright red backdrop. Hair in his eyes, hips swiveling, he spits his accusation at the camera. Behind him, a beautiful woman dances away – and, from time to time, she fades to a black or white silhouette. In one memorable shot, the white outline of the woman hangs behind Crawford with her arms outstretched, and, whether in sympathy or coincidence, his own arms drift away from the guitar neck. He echoes her motions; two figures thrown open to receive the spirit.

Here at HIP, we are very excited to be working with Christy Priske and the whole crew at Emotional Syphon Recordings to bring you this dynamic clip. They’ve set us up with plenty of copies of Butterfly Pinned for all of your on-air giveaway needs, and Monster In The Machine will be heading out on their national tour next month and will be out again in December with Team Sleep. In either case, hit us up if you’d like to get your hands on the disc, or if you’d like to set a video interview. We will hook you up! If you need more info call Andy Gesner at 732-613-1779, or email info@HIPVideoPromo.com.