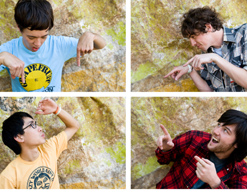 Greetings indie rock lovers, it’s Andy Gesner and the staff from HIP Video Promo, here to spread the word about a fantastic Bay Area indiepop band busy charming its way from the underground to international attention. It’s easy to see why – not only do the morning benders look and sound like indie superstars, but they’ve got the knack for writing songs that’ll appeal to listeners of all musical genres. With their melodic sensibility, vocal harmonies and instantaneous hooks, the morning benders have been getting comparisons to legendary bands such as The Beatles and The Beach Boys; pretty amazing props for a band composed of kids ages 19 – 22 whose debut album just hit streets. And in Chris Chu, they’ve unearthed a frontman who’s more than ready for the video lens: a sweet-voiced 21 year old California kid with an angel’s face. It’s no coincidence that Chu plays a harried worker in both of the videos we’re sending you today – his downward glances and shy asides to the camera generate instant sympathy.

Chu and the benders have been touring the nation with The Kooks, rocking the Sasquatch, Monolith and Noise Pop festivals, and supporting bands such as and Yo La Tengo, Death Cab For Cutie and MGMT and leaving audiences smitten. Humming back their tunes, too – this quartet pens classic semiacoustic pop tunes that are instantly likeable and invariably memorable. talking through tin cans, the benders’s delightful debut (released May 6th on +1 Records), has already drawn raves all over the internet and blogosphere – Stereogum, Idolator, RCRD LBL, imeem, Pitchfork, etc are big fans – as well as mainstream press adoration from John Norris at MTV News, E! News, NPR, Spin, Blender, Filter, Nylon, LA Times, LA Weekly, SF Weekly, SF Bay Guardian, Boston Globe, and much more. They have also been getting lots of love on Live105 and KUSF in San Francisco as well as KCRW, KEXP, XMU and other tastemaking stations. During the week of their album release, the morning benders were featured as the ‘indie spotlight’ on the homepage of iTunes and on the homepage of YouTube (getting 150,000+ views).

Boarded Doors” is the first single, and we’d wager that its quietly-provocative video is sexy enough to cause a sensation in the generally-staid indipop underground. But just to prove the point that the morning benders are frighteningly-consistent pop craftsmen, we’re also appending the clip for second single “Waiting For A War” to this reel. The “Waiting” video is nearly as eye-catching as the “Boarded Doors” clip; taken together, the two spots tell the story of a young band with a coherent sound in complete control of their imagery.

The “Boarded Doors” video was directed by the Daniel Stessen of the acclaimed art collective People-Food (www.people-food.com). The clip casts Chu in the role of Al Bundy’s dreams – he’s a retail shoe salesman in a store that appears to be frequented only by long-legged women. They sit on the benches and flash their stunning gams at him; he rolls his eyes and struggles to keep control of himself, as these women are many years his senior. We watch him take trips to the stockroom, and emerge with piles of boxes; the store patrons take off their shoes and wait for him in revealing dresses. At first, the women don’t pay him much mind, but by the middle of the clip, they’re teasing him, ruffling his hair, dancing in front of him, and even kissing his neck. It’s a neat parallel to the experience of the working indie band: ignored at first, and then gradually the recipient of all kinds of wanton attention! Chu holds the women off as best as he can (he even dodges a close encounter with a suspicious husband), and at the end of the video, we discover the reason for his restraint, along with a surprise twist. The ending ties neatly to the opening lyric to the song: ‘When you find out everything you’re looking for/All that’s left is an empty house with a boarded door.’

In the “Waiting For A War” video, directed by Alexander Safdie, aka bigAL, and Ronald Schnetke, aka ronnieROYAL, Chu demonstrates a different kind of grace under fire. Once again, his predicament is instantly identifiable: he’s a white-collar laborer working in a horrible office, fighting off boredom and frustration in a cubicle that feels like a cell. Crumpled papers are stacked in his overburdened inbox, and his bandmates peer at him over the divider. Lost in a daydream, the walls beyond his office turn into bars, and beyond the grate, there’s a cemetery stalked by soldiers. Electronic wires hanging from the trees let us know we haven’t left the air-conditioned confines of the office – but that doesn’t save Chu from a forced indoctrination into the military. As in the “Boarded Doors” clip, he’s dogged by modern ill fortune; once again, he’s impossible not to sympathize with, and harder still not to root for.

It has been our pleasure to work in tandem with the good people of the newly launched +1 Records team to bring you these fine videos. The band is currently traversing the country as the opening act for The Kooks, and chances are they’ll be coming to a market near you! If you’d like to set up a video interview when they come through, drop us a line! If you need more info, call Andy Gesner at 732-613-1779 or e-mail us at info@HIPVideoPromo.com. You can also visit www.PlusOneMusic.net to find out more about the morning benders.