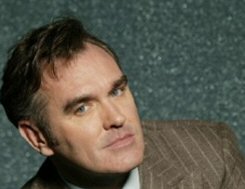 Hi everybody! It’s Andy Gesner and the staff from HIP Video Promo, and today we feel honored, privileged and like teenage kids all over again! We’ve always been enormous fans of Morrissey and The Smiths, so it’s with the enthusiasm of the dedicated that we bring you the video for the anthemic “The First Of The Gang To Die”. It’s no exaggeration to call Morrissey one of the most influential figures in modern rock – his followers are legion, and the hippest new bands on both sides of the Atlantic claim Morrissey as a musical hero. Now the master of literate, theatrical pop and the ideological spearhead of the British Invasion of the Eighties has returned with his first complete album of new material in seven years, and as “The First Of The Gang To Die” shows, he’s still leading the way.

You Are The Quarry, expertly produced by Jerry Finn (Blink 182, Bad Religon, AFI), has been called a comeback album for Morrissey, but we don’t look at it that way – we just think public perception has finally caught up with his legacy. The last two Morrissey albums, Southpaw Grammar (1995) and Maladjusted (1997), were experimental departures, featuring longer songs with detailed instrumental sections, and a few compositions that were uncharacteristically low-key. You Are The Quarry returns Morrissey to the brash, concise, guitar rock ofYour Arsenal. These are sharp, stylish, clever songs with big hooks; some jangle, some glam, all sung in that distinctive baritone that changed rock history.

It’s also the most American album he’s ever made. Since the late Nineties, Morrissey has lived in Los Angeles, and true to form, he offers a very articulate Mancunian take on stateside life. His fascination with Latin culture has been well-chronicled in interviews, and “The First Of The Gang To Die” is the latest exploration of a long-time Morrissey obsession: the street-tough who manages to be simultaneously sexy and ridiculous. The song’s narrator, one of “the pretty petty thieves”; tells of Hector, their leader and first to get a “bullet in his gullet”. He’s compelling, dashing, he “stole our hearts away; still, we’re reminded he’s “such a silly boy”.

The clip for “The First Of The Gang To Die” doesn’t dramatize the fall of the song’s main character. Instead, it’s Morrissey himself who is romanticized. The clip shows footage of a performance in a jampacked concert hall in hometown Manchester, and follows the main attraction onstage as he kneels, looks to the heavens, reaches his arms out to the audience, beckons, and works the crowd like the master of ceremonies he has become. As anybody who has attended a Morrissey concert knows, there is no limit to the adulation the singer receives, and this clip captures the love and wild worship on the faces of the concert-goers. Perhaps not so remarkably, they are mostly young – kids you’d otherwise expect to see at a Strokes or Shins show, lining up to pay their respects and cheer themselves hoarse for the man who started it all.

Because the effect of listening to Morrissey is cumulative – the more exposed you are to his worldview, the more in tune to his logic you become – we’ve added a bonus clip to your tape. We’re also including the video for “Irish Blood, English Heart”, the first single and video from You Are The Quarry. Here, we find Morrissey in a different sort of concert setting: a basement club with no elevated stage, surrounded by less-than-crazed listeners. Still, Morrissey dresses his best and is mesmerizing throughout this revved up track.

We must acknowledge our new friend Michael Plen at Sanctuary Records and sincerely thank him for bringing HIP on board for this super high profile campaign. It is a thrill to work for a label that has SO many great artists and bands on their roster (The Libertines, Neil Young, Jon Spencer Blues Explosion etc.). Michael will be working very closely with us and has every intention of making sure your Morrissey needs are met in a timely fashion. Morrissey will be on tour so if you are a fan, we can hook you up!

To stir up even more excitement, the “Morrissey is Back” contest will run throughout the months of August and September and give programmers the chance to win copies of You are the Quarry, cool Morrissey posters and other great merch for on-air giveaways. Any programmer that adds the “First Of The Gang To Die” video will receive CDs and posters: they will also be entered in a drawing to win two separate super huge grand prizes that includes an autographed copy of You Are The Quarry, an autographed poster and your 50 favorite CDs from the voluminous Sanctuary Records Group roster. Imagine all the great music you will be grooving to if you win this fantastic contest! If you need more info call Andy Gesner at 732-613-1779, or email info@HIPVideoPromo.com. The drawing for the two grand prize winners will take place September 30th.

You can also visit Morrissey’s Official Site or The Sanctuary Group for more info on this indie rock icon.