Mötley Crüe “Mutherfucker Of The Year” 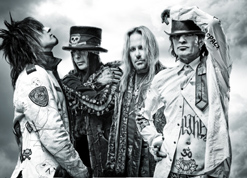 Greetings fellow rockers! It’s Andy Gesner and the staff of HIP Video Promo, excited to be bringing you the latest from a hard rock band from Los Angeles that you might just have heard a few things about. We’re not sure how the radio sounds where you live, but here in the New York metro area, the rock stations have caught up to audience demand. Classic heavy music has finally been recognized for what it is: era-defining, artistically formidable, impossible to dismiss, and most of all still powerfully relevant to this day. Mötley Crüe may just be the definitive act in the great tradition of theatrical hard rock music that managed to reach a mass audience without compromising either wattage or bad attitude.

Chances are, Saints Of Los Angeles would have been enthusiastically received by audiences and critics no matter what it sounded like; luckily for us, it’s the best album they’ve put out yet. Unsurprisingly, audiences worldwide have gone wild: the album made its debut at #4 on the Billboard charts, and has hit the Top 10 in four different continents. The new single, “Mutherfucker Of The Year” is Top 5 at active rock radio and a Top 10 song at mainstream radio.

Saints finds the original Mötley Crüe lineup in top form: in fact, they’re all playing better (and rougher) than ever. The band has drawn inspiration from younger metal acts and classic sources, and forged a fresh sound that still feels entirely theirs. It’s a Crüe album, so the basics are covered – there’s plenty of sex, intoxicants, debauchery, and fast guitar. Tracks like “Just Another Psycho”, “The Animal In Me”, and “Chicks = Trouble” are familiar Crüe rave-ups: tuneful, shoutable, energetic, inspirational. But there’s another side to the album, too – one pulled from the pages of the band’s bestselling autobiography. The Dirt will be made into a major motion picture in 2009, and Saints Of Los Angeles could be its raucous, reflective soundtrack. There are hints of nostalgia and perspective on Saints, especially in the magnificent “Down At The Whisky”, a celebration of the club that the Crüe made famous. We’d never want to say that Mötley Crüe has slowed down, even for a second, because that isn’t true. But there’s real depth to Saints Of Los Angeles: it’s a three-dimensional album, and one destined to be remembered as a late-career classic.

The members of Mötley Crüe made their names on the rough-and-tumble live stages of Los Angeles; it was there they developed their theatricality, their showmanship, and their willingness to go over the top in the service of rock. Although their world-famous albums speak for themselves, the Crüe have always been a live band first, and they’ve always been most comfortable in performance. The clip for “Mutherfucker Of The Year” (“MF Of The Year” for the faint of heart), the second single from Saints Of Los Angeles, was shot at the Crüe Fest – a national arena tour featuring Trapt, Buckcherry, Papa Roach, and Sixx A.M. This summer, Crüe Fest has been one of the hottest tickets around, and the “Mutherfucker” video shows why: the legendary headliners put on one hell of a concert. There’s plenty of backstage footage, too, complete with tour busses, lascivious girls, massages, and some gratuitous violence done to mannequins. But the action really starts when the lights go up – and Mötley Crüe shows why they’re still considered the most exciting band in rock and roll.

Huge thanks to the entire Eleven Seven Music crew for bringing us on board to be a part of the Mötley Crüe promotional team! We know you’ll be asking, so they’ve hooked us up with plenty of copies of Saints Of Los Angeles for your on-air giveaway needs! If you need more info, call Andy Gesner at 732-613-1779 or e-mail us at info@HIPVideoPromo.com. You can also visit www.Motley.com or www.ElevenSeven.net to find out more about Mötley Crüe.