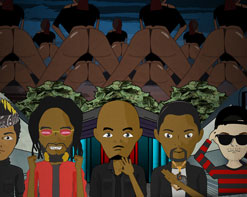 EDM music has scene an unprecedented rise in popularity in the past decade. The availability of cutting edge gear and software has allowed artists to tenaciously create new music from anywhere and also to explore new sounds and production techniques. And while the EDM genre itself is exploding, artists who have long been established in other genres have also embraced the digital approach and have found new and creative ways to blend genres to create something new, ambitious, and completely unique.

Take, for example, the new “Booty Bounce Pop” song and video from hip-hop legend Mr. ColliPark. This Atlanta native and Grammy-nominee has teamed up with some of the hottest rising stars from the electronic music scene in order to shine a light on all of the exciting things happening in his sphere. First is Atom Pushers, whose ability to work up a twerk is second to none. The other component is DJ Wavy, another early adopter of the hip-hop/EDM mashups. As if that wasn’t enough star power, Mr. ColliPark has also enlisted the help of his longtime collaboration friends, the Ying Yang Twins. Put it all together and you’re treated to a song that explodes out of the speakers with a musical foundation that attacks all of the frequencies and senses in a viciously rewarding way. With such a wild beat, the Twins run wild in their trademark fashion, showing why they have achieved such legendary status in the hip-hop community.

For the video, this collective knew that the party nature of the song is over the top from the start. They also knew if they matched that in real life it just might melt TV screens. So, they did the wisest thing, they turned the entire thing into an animated masterpiece! With animated booty bouncing in high supply from start to finish the animated versions of all five work their way from the tour bus into the club, right down the red carpet. They also have a roll call of celebrity friends also strolling down the red carpet. Lexi Panterra, Justincredible, Jay Dabhi, Flipside, DJ Sourmilk, DJ Erock, and the Coaltion DJs are all in the house. Once they get inside you can only imagine how insane and out of control this party gets. Or how about flying on a jumbo jet to the concert? Is it over the top and ridiculously fun? Of course, and that’s the point!

We’re very excited to be working closely with the entire crew in order to get this video in front of the eager eyeballs of viewers and programmers alike. Please contact Andy Gesner and the HIP Video Promo crew at (732)-613-1779 or email info@HIPVideoPromo.com . You can also visit  for more info.