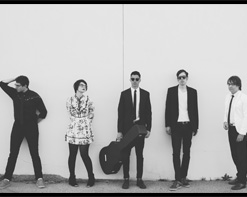 Birmingham, “The Magic City,” Alabama is the indie rock city that just keeps on giving, this time in the form of the exceptional new act MRYGLD (pronounced ‘marigold’). This band is as fresh as they come, formed recently in 2017 by Brandon Snipes and the musical “dynamic duo” of Shane and Alyssa Jewell. After recruiting drummer Kyle Blair and bassist James McCauley, the lineup was set and MRYGLD was born.

Aside from playing lots of local live shows and branding their six letter moniker, MRYGLD has been busy recording their self-titled debut EP, which was officially released in June. Though the band is a brand spankin’ new musical entity, that’s not to say that they haven’t gelled quickly into a formidable unit. They’ve all got plenty of rock and roll miles under their belts, and the instantaneous vision makes it feel like everything up until now was just getting them ready for MRYGLD.

The video for their first single “Cool Kids” introduces the band via a nerdy, awkward grammar school performance, ready to take on the stage in their awkward clothes and entertain the students (think Napoleon Dynamite). After the audience puts on the distributed 3D glasses, the performance transforms from nerdy and weird to electrifyingly cool, complete with black lights, lasers, and a smoke machine. It’s every kid’s idea of cool. At the end of the video, the entire school staff and student body share the floor in an epic dance party. With lyrics like “Where are the cool kids? Did they become our parents?” This track is no doubt relatable to viewers from everywhere of every kind.

MRYGLD is quirky, fun, and talented, exactly what we look for here at HIP Video Promo. We’re thrilled to be working with them and sure that everyone will be on board with endless support for this new band! Please contact Andy Gesner and the HIP Video Promo team at (732)-613-1779, email us at info@HIPVideoPromo.com or visit www.MRYGLD.com for more info on MRYGLD.