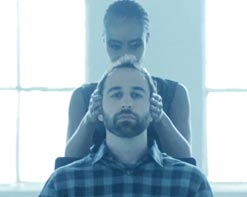 My Silent Bravery’s new single “P.O.V.” is a cool crossover clip from an artist who is usually in his comfort zone in the acoustic pop-rock world but has thrown himself into working with electronic huntings, part of his reimagining of the adored full length Diamond from Coal. When we brought you his videos for “On My Side” and “Forever” we shared with you an artist who used his gift for intimate songwriting to craft songs that are honest, poetic and engrossing in their ability to touch the heartstrings. This approach has earned recognition as far and wide as Billboard, Independent Music Awards, dozens of song placements and a legion of devoted fans.

As an artist who is always striving to elevate his skills and challenge himself artistically, there’s a palpable level of excitement behind the newest release, a remix album of Diamond from Coal. This was no small feat, either, because it wasn’t just a matter of changing a few levels and adding a few instruments. This is a total reinvention, taking these songs into territory that neither MSB’s Matthew Wade or his fans have imagined them going before. The first offering from the new album is the single “P.O.V.” In its original form, the song is a fast paced number that only hints at an electronic, but this new variation (remixed by Richard Fraioli and adding the vocal talents of Shea Rose) turns the song into a heavy, throbbing  bomb of a track that explodes with a new sort of ferocity that channels all of the conviction of My Silent Bravery.

The new video for “P.O.V.” is a colorful, fast moving mini movie where deceit runs rampant and the “point of view” is skewed depending on whether it’s the male protagonist (Wade) or female protagonist (Rose). The video is a blistering back and forth set in an industrial warehouse where the two sensually strut around each other, delivering strong performances for the camera. Fans of My Silent Bravery will also notice the video is a continuation of the “Forever” video storyline, revealing a slightly more sinister approach to the original narrative.

Much like the remixes reveal a different side of Diamond from Coal, the new “P.O.V.” remix video shows that there’s always another side of the story. Please get in touch with Andy Gesner and the HIP Video Promo staff at (732)-613-1779 or email us at info@HIPVideoPromo.com . You can also visit www.MySilentBravery.com/ for more info.

For info about My Silent Bravery’s previous videos, click HERE