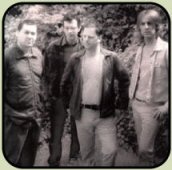 A lot of folks thought that Mudhoney were down for the count, but their new record Since We’ve Become Translucent proves that before there was Queens of The Stone Age, or even Nirvana, Mudhoney were the progenitors of grunge/garage/psychedelic rock and they still continue to break new ground in a genre overrun by newcomers and wannabes. Mudhoney has the ability to soothe your soul and maybe even save it, and the new vid for the song “Sonic Infusion” reveals a band rebuilt and revived.

It’s always nice to catch up with old friends. And, like old friends, Mudhoney has proven to be reliable. A lesser band would have allowed their status as founding fathers of the near-mythic Seattle grunge movement to go to their heads; but for these fellows it’s obviously never stopped being just a hell of a lot of fun.

What’s more, with Since We’ve Become Translucent, the band can finally leave behind the oft-heard gripe that “it’s OK, but ‘Touch Me I’m Sick’ was better”. The band has matured (almost despite themselves). There’s still plenty of their signature big distorted guitar sound here, but the songwriting displays a new and intriguing level of depth and perception. Mudhoney has deftly avoided the hazard of falling into self-parody that ensnares so many bands after they’ve been at it for a decade or more.

This may be the first time the words “slick” and “Mudhoney” have been used in the same sentence; but the Japanese sci-fi framing scenes from the “Sonic Infusion” video come tantalizingly close to that. And while that’s the ostensible “featured” track on the new CD, from beginning to end this is a recording that is consistently solid…certain not to disappoint their old fans and likely to attract new ones.