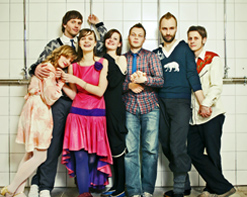 Greetings cherished programmers! It’s Andy Gesner and the staff from HIP Video Promo with a uniquely challenging clip with an enormous reward! By now, those of us who are tapped into the indie underground know what to expect from Icelandic music: unique voices, departures from conventionality, experimentation, mysticism, strange and playful beauty. But even in Reykjavik, few bands embody those virtues more fully than Múm. Since 2000, they’ve been working toward a fusion of electronica, indie rock, musique concrete, and experimental music – and with Go Go Smear The Poison Ivy, they’ve made their most stellar and approachable set yet. As weavers of sonic tapestries, they’ve always had few equals; now, they can boast of crisp melodic songwriting that can stand alongside the best indiepop.

But although the members of Múm are using more acoustic instruments on Go Go Smear The Poison Ivy, there’s nothing “normal” about this record. Instead, it’s a creative and enchanting journey through a forest of beats, gently-struck piano and sweeping synth, warm strings, strummed guitar, hushed boy-girl vocals, and indescribable – but breathtaking – sonic effects. The lead track on Go Go Smear The Poison Ivy is called “blessed brambles”, and that’s a good description of the entire record: it’s beatific, wild, and organic. Even at their most cryptic, the lyrics are both evocative and madly romantic; this version of Múm is easy to follow, even when it’s intent is to get you lost in the magic thicket. And as for their production ambition? This is a band that composed their own score toBattleship Potemkin and played it to enthusiastic reviews around Europe and the US; cinematic soundscapes come naturally to them.

“They Made Frogs Smoke ‘Til They Exploded” manages to be simultaneously sweeping and gentle; it’s got a rocking-chair rhythm, clattering pitter-patter percussion, and a melody that seems to have been recorded by a cast of thousands singing as quietly as they could. Múm has a collaboration with Kronos Quartet on their resume, and the arrangement imagination and near-classical precision of “they made frogs smoke ‘til they exploded” betrays the band’s considerable musical training. For all that, this is a pop song, too – so don’t be surprised if it gets stuck in your head and seeps into your dreams.

Animated in bold detail by Ingibjörg Birgisdóttir, the clip for “They Made Frogs Smoke ‘Til They Exploded” is a perfect companion-piece to Múm’s strange, hypnotic, and stealth-dangerous music. The clip features drawings of pleasant settings: boy scouts by a lake, forests and trees, happy, grinning children and adults. Each frame is drawn in colored pencil, crayon, and watercolor paint, and we watch each image as it develops from a black and white sketch to a fully-shaded painting. As we watch, Birgisdóttir fills in shirts and scarves, adds hue to hair, and colorizes faces. But it’s not all twee here: each sketch in turn is, in turn, intentionally overdrawn. The animator adds fangs to faces, hangs grotesque masks on heads, and generally mangles and mutilates the idyllic images she’s creating. Finally, the pictures seem to eat themselves from within, shriveling up and making room for the next drawing. This all happens rapidly: an idea is sketched, achieves a kind of balance, becomes overdeveloped, and then folds back in on itself. It seems to echo the constant organic growth and decay – and change of seasons – that animates so much of Múm’s dazzling music.

It is our true pleasure to be working together with Anna Bond and the FatCat Records team to bring you this hypnotic clip. We have plenty of copies of Go Go Smear The Poison Ivy available for all of your on-air giveaway needs, so drop us a line and we’ll hook you up. We are also hoping to set you up with a video interview with the band when they come to the US this fall. If you need more info, call Andy Gesner at 732-613-1779 or e-mail us at info@HIPVideoPromo.com. You can also visit www.FatCat-USA.com to find out more about Múm.