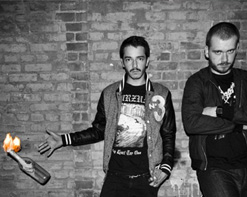 Greetings programmers! It’s Andy Gesner and the HIP crew with a saucy new video from the French electro production/remix duo Mustard Pimp. The Frenchmen have crafted a 1970s inspired gritty dance presentation that will have you shocked, aroused, and fully disturbed with their undeniably unforgettable “ZHM” music clip.

Mustard Pimp, despite being a pair of rather mild mannered lads in their private life, have built a global reputation as strutting, snarling raucous rock gods, spewing take-no-prisoners techno, prowling and pacing around the stage. The band has also developed a presence doing official remixes of songs for some of the world’s well-known groups such as The Deftones, Eagles Of Death Metal, Afghan Raiders, and Designer Drugs to name a few, as well as tons of unofficial remixes for internet consumption.

Mustard Pimp are now set to catch global attention once again with “ZHM,” the leading single from their debut full-length album No Title Or Purpose, which features numerous sensational collaborations like Skrillex, Atari Teenage Riot, Blatta & Inesha and many more. The band is currently performing in support of the single which has just hit the blogosphere, including coverage from Discobelle and Death Electro. The song is instantly and infectiously danceable, featuring a kick heavy beat, fuzz to the brim, and enough hooks to catch a shark. However, what truly seals the deal and imprints this release into your brain is the hilariously shocking music video. The clip starts off in a vintage flare introducing the two main characters – the gorgeous Honey Peters and the dangerously cheesy Randy Hungwell. The video then starts off with Randy showing up at Honey’s house selling hot dogs, which she then covers with mustard in a seductive manner. Before you know it, things heat up and the two start getting hot and heavy, with the first major twist popping out: The couple’s genitals are replaced by talking puppets! The puppets then proceed to make out, get rough, and then completely beating each other up. The whole clip then results in a bloody mess, as the protagonists get covered in blood and dramatically die.

This video will make you laugh and gross you out all at the same time, without ever being graphic or NSFW. We’re proud to bring this high quality visual treat on behalf of the Dim Mak Records team and hope you will join in on the riot. We’ve got Mustard Pimp stuff here at the office, so if you’d like to team up and run a contest or giveaway, don’t be shy about getting in touch. If you need more info, call Andy Gesner at 732-613-1779 or e-mail us at info@HIPVideoPromo.com. You can also visit www.MustardPimp.net to find out more about