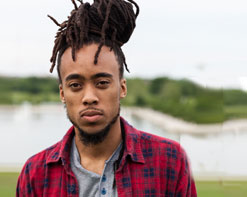 Mvstermind, a brilliant new voice from St. Louis, has been quietly honing his game for the past few years. Many artists brag about mixing genres and influences, but Mvstermind accomplishes an even more impressive feat; he manages to capture his laid back attitude with the skill and precision of a furious perfectionist. This is no accident. This artist pulled himself back from the scene for several years to perfect his craft. In fact, his new single, “Mali Moolah,” wasn’t even supposed to be a release. Yet, when friends and fans heard the new track the reaction was instantaneous and overwhelmingly positive. It was official, the Mvstermind train arrived ahead of schedule.

Beyond the self-produced beats and the pure skill of a slick cadence, “Mali Moolah” is a song that has many layers of substance. At first listen, the message feels like one all about making moves and making dollars. A deeper listen, however, reveals a song that thinks in a much bigger picture. It’s about self-worth, being confident in one’s ability to accomplish big things, and ultimately taking that success and spreading it across the culture. Like the old saying goes “a rising tide lifts all boats,” and with the new video for “Mali Moolah” he intends to put his beloved Gateway City and the burgeoning music scene on the national map. He’s already off to a good start, having shared stages with artists such as Chance The Rapper, Travis Scott, G-Eazy, Ab-Soul, and more as well as being listed by Complex as the top rising artist from St. Louis.

“Mali Moolah” is a killer visual that rides along with Mvstermind as he takes the viewer on a tour of his home terrain in St. Louis. It starts with Mvstermind dropping his lines to the camera in front of the Moolah Temple and the Scottish Rite Cathedral, two imposingly beautiful fixtures in the Midtown neighborhood. Anyone who knows St. Louis, though, knows that city is so much more than just the architecture that defines it. It is all about the people and the neighborhoods. Whether it be on the vivid city streets, or in the thriving nightlife, or even overlooking the Mississippi River and the plains from the Alton bluffs upstream, Mvstermind paints a full picture of the city that he calls home. Every step of the way he takes it all in like a man who has walked these steps thousands of time before. Based on the attention and love heaped on him along the way, it’s also clear that he is a beloved fixture in his hometown.

Here at HIP Video Promo, we absolutely love when a new artist comes our way and totally changes our entire persective of a city. Mvstermind has done just that, introducing us to a sound that we are all incredibly eager to share. We’re confident you and your viewers will embrace this video as much as we have, and we are anxious to do anything we can on our end to help get it into your programming. Please get in touch with us here at HIP Video Promo at (732)-613-1779 or info@HIPVideoPromo.com. You can also visit www.Mvstermind.com for more info on Mvstermind.