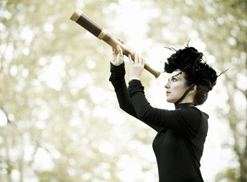 Hello music lovers, it’s Andy Gesner and the staff from HIP Video Promo. A papier-mâché doll with a winsome face crawls through outer space on a ladder. Moons and planets hang in the black sky behind her; there’s a palpable feeling of peril, but the doll rests safely in the hands of its animator. Suddenly, the camera focuses in on the puppet – and before our eyes, its face changes into that of My Brightest Diamond frontwoman Shara Worden. The beautiful Worden continues her ascent into the stars – away from the terrestrial and into the stratosphere, held aloft by invisible hands.

It’s a gorgeous constellation of images; it’s also a visual metaphor for My Brightest Diamond’s artistic journey. Since the release of Bring Me The Workhorse, her dazzling 2006 debut, she’s been one of indiepop’s most reliable explorers of otherworldly sonic spaces. Listening to her music is like taking a trip into the radiant unknown – it’s an encounter with the mysterious, the magnetic, the unexpected, the magnificently surreal. It isn’t a frightening one, though: Worden’s warm, inviting voice is a welcome guide through the dreamlike soundscapes.

Anticipation for the follow-up to Bring Me The Workhorse has been building for the past two years. National tours with Sufjan Stevens (Worden was a charter member of the Illinoisemakers, Stevens’s band) and The Decemberists have introduced the singular My Brightest Diamond sound to audiences all over the country; the release of Tear It Down, a set of Workhorse remixes, proved the flexibility of Worden’s inspired songwriting. Preliminary interviews suggested that the My Brightest Diamond follow-up would prominently feature a string quartet – Shara Worden is classically-trained, a student of opera, and a devotee of Debussy and Ravel. A Thousand Shark’s Teeth does suggest familiarity with classic sources, but it is also reminiscent of the work of Jeff Buckley, Antony & The Johnsons, and Patti Smith. “From The Top Of The World” is, like all the tracks on A Thousand Shark’s Teeth, a shimmering, multifaceted gem of a song, and one that reveals greater luster upon each subsequent listen. It’s theatrical, dramatic, and musically inventive, but above all, it’s wonderfully inviting. My Brightest Diamond may be bold and experimental, but there’s nothing at all forbidding about Worden’s dazzling dreams.

The clip for “From The Top Of The World” is another seductive hallucination. It’s a galaxy populated by haunting-looking papier-mache puppets and elegant humans – but it’s not always clear who’s animating who! The hands that carry the Worden-doll through the brilliant ether are delicate and gentle: they move the limbs of the puppet with protective care. Here, it’s the person controlling the environment; the hands remind the viewer that we’re watching a panorama created by an art director. But then the real Shara Worden falls through a hole in the sky (after hanging upside down from a moon-like planet) and falls to a strange Earth inhabited by a human-sized puppet. It takes her and moves her as if she’s a marionette – and she gives herself over to the doll’s control. Overhead, the planets and stars stream by, each with its own size, shape, and color, each carrying mysteries of its own in its orbit.

It is a real treat to be working with Michael Kaufmann and the team at Asthmatic Kitty Records to champion My Brightest Diamond. Also, don’t forget to reach out to us for all your on-air giveaway needs, as the label has provided us with a bountiful supply of the record A Thousand Shark’s Teeth. If you need more info, call Andy Gesner at 732-613-1779 or e-mail us at info@HIPVideoPromo.com. You can also visit www.MyBrightestDiamond.com to find out more about My Brightest Diamond